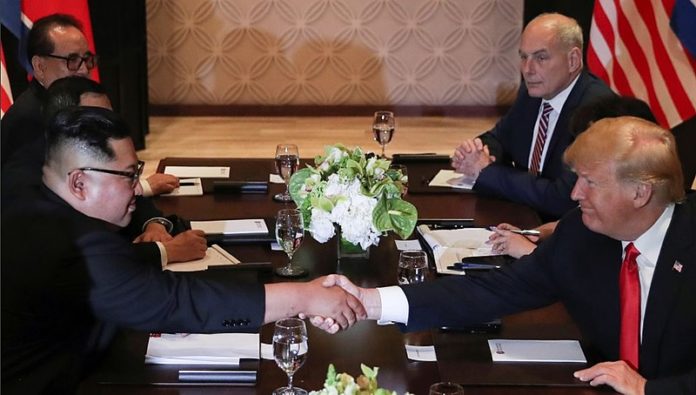 President Donald Trump is still being willingly duped by North Korea this week, even going so far as to refer to a New York Times report on the deception as “fake news” despite the fact that Kim Jong Un has 16 hidden nuclear missile bases that pose a serious threat to the world.

For months, Trump has insisted that North Korea is no longer a threat and wants to denuclearize. However, North Korea has not taken a single step towards doing that and has instead put on a show to fool a president who is desperate for a foreign policy win.

On Monday, the depths of North Korea’s deception were exposed by a New York Times report explaining that while Kim Jong Un is dangling denuclearization in front of Trump by halting missile tests and dismantling an old test site along with not including ICBMs in a recent military parade, the North Koreans have 16 hidden bases that are being upgraded and could be nuclear missile operational soon, if not already.

The satellite images suggest that the North has been engaged in a great deception: It has offered to dismantle a major launching site — a step it began, then halted — while continuing to make improvements at more than a dozen others that would bolster launches of conventional and nuclear warheads.

The existence of the ballistic missile bases, which North Korea has never acknowledged, contradicts Mr. Trump’s assertion that his landmark diplomacy is leading to the elimination of a nuclear and missile program that the North had warned could devastate the United States.

“It looks like they’re trying to maximize their capabilities,” North Korea analyst Joseph S. Bermudez Jr. told NYT. “Any missile at these bases can take a nuclear warhead. The level of effort that North Korea has invested in building these bases and dispersing them is impressive. It’s very logical from a survival point of view.”

And that poses a direct threat to the United States and our Asian allies that Trump is clearly ignoring based on his latest tweet in response to the report.

The story in the New York Times concerning North Korea developing missile bases is inaccurate. We fully know about the sites being discussed, nothing new – and nothing happening out of the normal. Just more Fake News. I will be the first to let you know if things go bad!

No, Trump won’t be the first. He’s going to deny that things are going bad until it’s too late to do anything about it and people die. That’s because he’s stubborn and refuses to admit he’s being played. He certainly won’t admit he’s getting his ass handed to him by a two-bit dictator.

But that’s exactly what is happening and he’s calling it “fake news.”

If anything, this is disastrous news that exposes a serious threat to our national security and safety. Kim Jong Un successfully duped Trump to buy time for his military to develop nuclear missiles and install them at bases throughout the country. Now stopping a nuclear North Korea could be impossible, and the sanctions are no longer working properly because Trump has allowed North Korea to take advantage of him. Just by repeatedly claiming that Kim Jong Un is cooperating, North Korea has been to leverage that to open trade with China and Russia, which basically neuters the power of strong economic sanctions that had been in place for years.

In his desperation for a foreign policy victory, Trump engaged with an enemy and lost because of his own narcissism and ego. Now the American people could end up paying for it with their lives as the prospect for nuclear annihilation becomes more of a reality. And when that first nuclear blast on an American city occurs, Trump won’t be able to call it “fake news.”