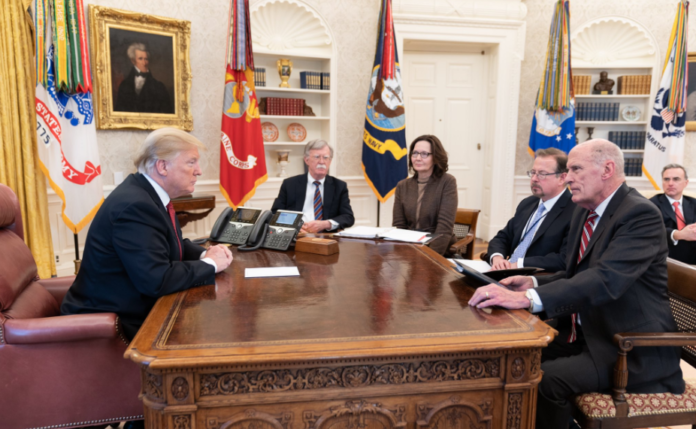 President Donald Trump threw his intelligence officials under the bus on Thursday to claim that he’s not lying about ISIS, Iran, North Korea, and Russia, making it appear that they lied to Congress during their testimony.

All of them agreed that North Korea is still a nuclear threat, that Iran is not pursuing nuclear weapons, and that ISIS is not defeated in Syria, thus contradicting all of Trump’s claims.

Trump responded by lashing out at his intelligence officials and desperately insisted that he’s right and they are wrong.

That brings us to Thursday, and after a meeting in the Oval Office with those same officials, Trump basically accused them of lying to the Senate Intelligence Committee and claimed they all agree with him.

Just concluded a great meeting with my Intel team in the Oval Office who told me that what they said on Tuesday at the Senate Hearing was mischaracterized by the media – and we are very much in agreement on Iran, ISIS, North Korea, etc. Their testimony was distorted press…. pic.twitter.com/Zl5aqBmpjF

….I would suggest you read the COMPLETE testimony from Tuesday. A false narrative is so bad for our Country. I value our intelligence community. Happily, we had a very good meeting, and we are all on the same page!

But the testimony is very clear. It was on television and everything. People can literally go back and listen to what these officials said, and what they said is indisputable.

On Iran, Coats said that Iran is not trying to build a nuclear weapon as Trump claims and that it was Trump’s withdrawal from the Iran nuclear deal and the sanctions he put in place that is currently causing Iran to consider violating it despite complying over the last year.

Iran would have received those economic benefits had Trump honored the deal.

As for ISIS, it’s been clear since Trump first declared victory that he’s been lying. And Coats confirmed that on Tuesday.

“ISIS is intent on resurging and still commands thousands of fighters in Iraq and Syria,” Coats said, adding that the terrorist group “very likely will continue to pursue external attacks from Iraq and Syria against regional and Western adversaries, including the United States,” and “has returned to its guerrilla warfare roots while continuing to plot attacks and direct its supporters worldwide.”

Trump is even wrong about North Korea denuclearizing.

Haspel said North Korea “is committed to developing a long-range nuclear-armed missile that would pose a direct threat to the United States.”

So, either intelligence officials told the truth to the Senate, or they lied, which means the Senate should subpoena all of them to testify again and demand answers. They should be forced to publicly admit that they lied or contradict Trump again. Furthermore, perhaps Trump should also be subpoenaed to testify before Congress under oath, because lying about national security threats to the United States is a serious offense that puts Americans in danger. Either Trump is lying or his intelligence officials are lying and the Senate needs to sort it out fast.