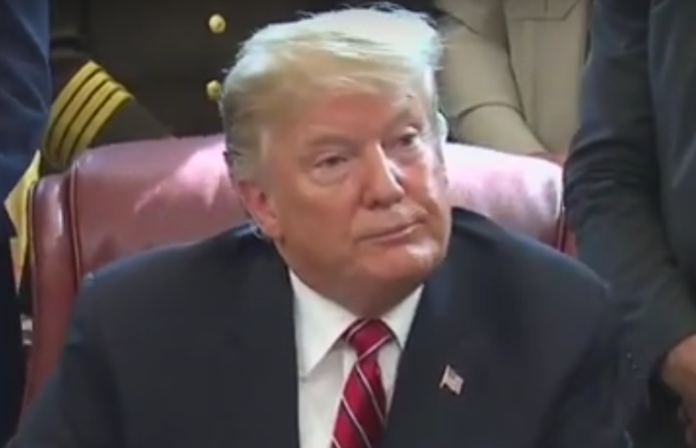 President Donald Trump brushed off the threat white nationalism increasingly poses to the safety of the country and the world on Friday despite a terrorist attack in New Zealand perpetrated by white nationalists.

The attack in New Zealand came as Muslims were praying in their place of worship in Christchurch. 49 people were murdered and at least 20 were wounded.

Trump initially responded to the attack by offering condolences, but said nothing about white nationalism nor did he condemn it even though it played a large role in the massacre because the killers left an 87-page manifesto behind demonizing immigrants and Muslims.

During an Oval Office event in front of the cameras to veto the recently passed resolution of opposition to his national emergency declaration, Trump once again characterized immigrants as criminals and drug dealers and blamed them for all our problems before taking questions from reporters.

One reporter asked Trump if he thinks white nationalism is a rising problem around the world.

“I don’t really,” Trump responded. “I think it’s a small group of people that have very very serious problems. I guess, if you look at what happened in New Zealand perhaps that’s the case. I don’t know enough about it yet. They’re just learning about the person and the people involved. But it’s certainly a terrible thing.”

The Anti-Defamation League called white nationalism an “international terror threat” in a statement condemning the violent attack in New Zealand.

And even the Department of Homeland Security and FBI warned of the growing threat by white nationalists in May 2017.

The report, dated May 10, says the FBI and DHS believe that members of the white supremacist movement “likely will continue to pose a threat of lethal violence over the next year.”

The report, titled “White Supremacist Extremism Poses Persistent Threat of Lethal Violence,” was prepared by the FBI and DHS.

The bulletin’s numbers appear to correspond with outside estimates. An independent database compiled by the Investigative Fund at the Nation Institute found that between 2008 and 2016, far-right plots and attacks outnumbered Islamist incidents by almost 2 to 1.

Clearly, Trump has ignored these warnings and has elected to let white nationalists run wild across the country threatening and terrorizing people while he repeatedly portrays Muslims and Hispanics as the true threat. Now white nationalists are an even bigger threat and more people are being killed by these extremists. And they have the president in their pocket.