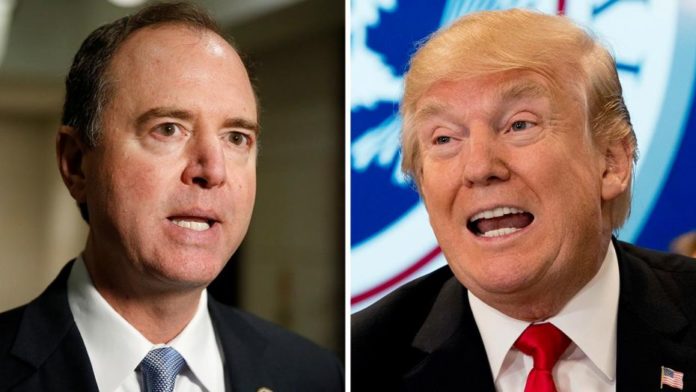 President Donald Trump just can’t stop himself from behaving like an 11-year-old bully on the playground by slinging petty insults at people he doesn’t like. This time he targeted Rep. Adam Schiff (D-Calif.), and it backfired spectacularly.

Schiff has been critical of Trump’s appointment of Matthew Whitaker as Acting Attorney General, a decision that legal experts say is unconstitutional because Whitaker was never confirmed by the Senate.

The Appointments Clause in Article II requires Senate confirmation for principal officers of the United States government, which includes the Attorney General.

Of course, Trump apparently watched Schiff on television on Sunday morning, and decided to attack him.

Trump’s manipulation of Schiff’s name is such an elementary school move that Republicans should be hanging their heads in absolute shame that he actually used this schoolyard insult as president.

It should be pointed out that Trump is wrong about Special Counsel Robert Mueller. His appointment as special counsel is perfectly legal because he is an inferior officer in the Justice Department who was appointed by then-Acting Attorney General Rod Rosenstein, who had been confirmed by the Senate.

Precedent is also on Mueller’s side because special counsels have been appointed without Senate confirmation in the past, such as Archibald Cox during Watergate. And we all know how that turned out for the president at the time.

Anyway, while Trump’s petty barb really did not deserve a response, Schiff did so anyway with a humiliating burn.

Was that like your answers to Mr. Mueller’s questions, or did you write this one yourself? https://t.co/Yd27sayt7C

Trump has been insisting that he recently answered Mueller’s questions in writing all by himself without help, which isn’t very credible since Trump clearly can’t even put together a coherent tweet.

Schiff then followed up by posting a video of his remarks about Whitaker’s appointment.

Matt Whitaker’s appointment violates the Constitution, the DOJ succession statute and the rules of ethics, since he was appointed for the express purpose of interfering with Mueller’s investigation.

During Watergate, Republicans defended the rule of law. Will they now? pic.twitter.com/3Zoc4aZjqH

Whitaker is required to be confirmed by the Senate as per the Constitution. Mueller and his Special Investigation are not. You should really read and study the document that you have sworn to uphold and defend. #VeteransAgainstTrump#VoteBlue2020#MuellerTime

I’m waiting for either Melania or Ivanka Tramp to speak up about #DecorumDon‘s intentional misspelling of @AdamSchiff‘s name.#BeBest #Hypocrisy at its best.

And you wonder why no one respects you…

The Office of the President was made for better things than an infantile tweet misspelling a congressman’s name like a curse word. But the real crime is its corrupt occupant being allowed by a morally bankrupt congress to fire the heads of agencies for investigating his campaign.

Here you go, folks. This is the sort of thing that an immature middle-schooler thinks is clever.
A typo? It’s been up for hours, and it’s certainly been noticed, so, no.
Just a bathroom insult from Little Tantrumpy. Oh, did I make fun of his name? Shame on me.

Mr. President, this is middle school-type cackling and name calling. It is not appropriate for your office—or your advanced age.

“Decorum,” the President told the press corps Friday. “You have to practice decorum… you have to act with respect. You’re in the White House.” https://t.co/FFdJvhDocL

Trump has once again demonstrated that he is an embarrassment to the presidency and the nation. But his lack of self-control is only backfiring. Not only is he being called out for acting like a petulant child, but voters are also going to keep note of this kind of behavior at the voting booth in 2020 when they have a chance to take out the trash. And that’s if Trump hasn’t been impeached or arrested by then. After all, Mueller is close to finishing the Russia investigation. And it was a serious mistake to attack Schiff, who will be the likely incoming chairman of the House Intelligence Committee and has the power to reopen the Russia investigation House Republicans prematurely ended.

Now Schiff has even more motivation to investigate the hell out of Trump and his administration. Trump is surely going to regret this cheap shot.