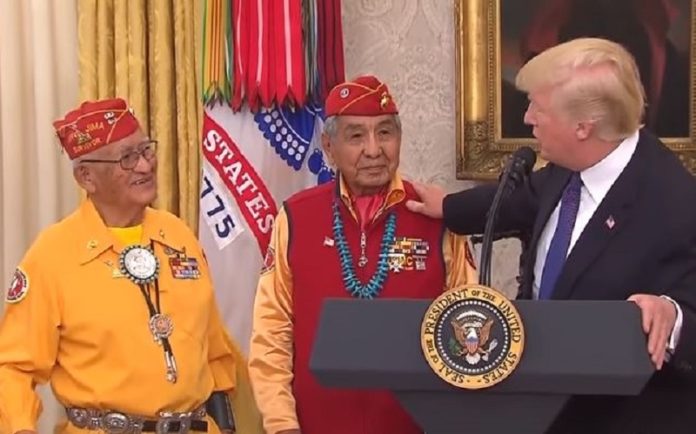 In an absolutely insane moment of total embarrassment for the nation, President Donald Trump insulted the Native American veterans he was supposed to honor during a ceremony Monday afternoon. While giving a presentation at the White House to honor Navajo Code talkers, Trump went off-script and said:

I just want to thank you because you are very, very special people. You were here long before any of us were here. Although, we have a representative in Congress who has been here a long time … longer than you — they call her Pocahontas!

Although he did not coin that nickname for Senator Elizabeth Warren,  he has used that slur for her before, so the implication was obvious. In an attempt to correct himself, he added:

But you know what, I like you. You are special people.

Warren’s response, given to MSNBC shortly after the event, was more diplomatic:

It is deeply unfortunate that the President of the United States cannot even make it through a ceremony honoring these heroes without having to throw out a racial slur. Donald Trump does this over and over thinking somehow he is going to shut me up with it. It hasn’t worked out in the past, it isn’t going to work out in the future

It sometimes seems that Trump goes out of his way to insult minorities. Behind the podium and just above the Native American Heroes he was honoring hung a picture of Andrew Jackson, a former president who Trump has stated he admired in the past. Jackson is famous for signing the Indian Removal Act of 1830 which resulted in the “Trail of Tears” when approximately 17,000 Cherokees were forced out of Georgia at gunpoint and moved to what is now Oklahoma.

Does no one on his staff know history?

Press secretary Sarah Huckabee Sanders attempted to deflect the fallout from Trump’s racial slur by turning it on Warren and trying to blame her:

I think Sen. Warren was very offensive when she lied about something specifically to advance her career, and I don’t understand why no one is asking about that question and why that isn’t constantly covered.

Navajo Nation President Russell Begaye made a statement expressing gratitude for honoring the code talkers, but he also noted that “all tribal nations still battle insensitive references to our people.” Continuing his response, he added:

The prejudice that Native American people face is an unfortunate historical legacy. As Native Americans, we are proud people who have taken care of this land long before there was the United States of America and we will continue to fight for this Nation.

While this has not been the first time Trump has used this slur against Senator Warren, and it is probably not the last we’ll hear of it, this was perhaps the most offensive use of this slur in his entire existence. When will enough be enough? When will he go too far for even the Republicans to continue supporting him? When will the outcry from all the people he has offended during the past two years be enough to see him shut down?

Our president has become the laughing stock of the world and an embarrassment to us all.

Trump Refers To Elizabeth Warren As "Pocahontas" To Navajo Cod…

Trump just referred to Elizabeth Warren as "Pocahontas" while speaking to Native American veterans. This is SO BEYOND embarrassing and insulting. There are not enough WTF's in the world.