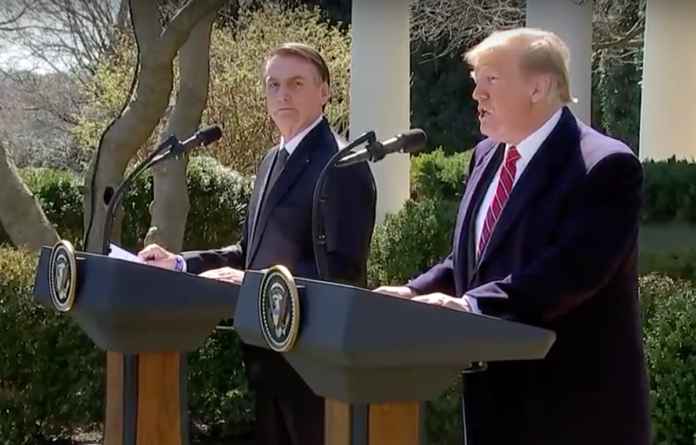 Trump and the new “Trump of the Tropics” stood before the world in the Rose Garden on Tuesday and attacked the free press. Trump gushed with pride as Brazilian President, Jair Bolsonaro, took up one of the damaging and disingenuous catchphrases Trump will be forever known for in the history books: “fake news.”

“In conclusion, may I say that Brazil and the United States stand side by side in their efforts to ensure liberties and respect to traditional family lifestyles, respect to God, our Creator, against the gender ideology or the politically correct attitudes, and against fake news.”

MSNBC noted that Trump “gushed with pride” at the remarks, which is horrifying on many levels. Aside from his obvious delight in exporting his fake news mantra, Trump showed no sign of disagreement with Bolsonaro’s attacks on gender ideology.

President Trump and "the Trump of the Tropics," Brazilian President Jair Bolsonaro, met at the White House.

Trump responded in more of his amped-up attacks on the free press:

“I’m very proud to hear the president use the term ‘fake news.’”

The remark came on the same day that Trump continued to rail against the free press on Twitter. Let’s face it: An American President should never behave like this.

The Fake News Media has NEVER been more Dishonest or Corrupt than it is right now. There has never been a time like this in American History. Very exciting but also, very sad! Fake News is the absolute Enemy of the People and our Country itself!

So after seeing this, there can be no doubt that Trump is actively fighting against the First Amendment, which he is sworn to protect. He doesn’t see the danger that his example is spreading across the world, helping to further squelch free speech, which is absolutely anti-American.

The comments come just days after Russia announced a plan to specifically crack down on “fake news” and “blatant disrespect” of Putin’s regime. The legislation is sure to wipe out what’s left of any credible journalism in the country as pointing out the truth could land journalists in jail as well as face steep fines. The option to shut down news outlets that Putin doesn’t like would be a simple matter. The worst part is it reads like a roadmap for Trump, one he seems to be taking to fondly.

Aside from the ever-more-alarming siege against free speech, we must point out that Trump’s ready acceptance of Bolsonaro and Putin’s hatred to LGBTQ people is equally alarming.

In February, Brazil’s only openly gay congressman, Jean Wyllys, so feared for his life under the new administration that he gave up his seat and fled the country. Bolsonaro has said, “he would prefer a dead son to a gay son.” Do Republicans want to see members of our Congress flee the country for their lives based on their minority status?

In what seems like a move straight out of the Handmaid’s Tale, Bolsonaro appointed an evangelical pastor, Damares Alves, as his “minister of women and family.” On Alves first day in office, she made a declaration that Brazil would mandate a fictional gender binary for the “New Brazil.”

The fact-based news about Trump should send shivers down the spine of any person who truly cares about our democracy. What Trump is doing at this point is rapidly spreading a war against the free press worldwide, not to mention equality. This isn’t American. It’s incredibly dangerous, and Republicans must stop putting Trump ahead of the future of our country.

A bright future is only possible is our leaders are held accountable to the truth, to facts, to the rule of law, and to the Consitution. What we have now appears more and more to be a global menace to everything that America has always stood for.

Hitler: Any journalist who criticizes me is the Lugenpresse! (lying news)

Trump: Anyone journalist who criticizes me is Fake News! pic.twitter.com/lVynJdKxy6