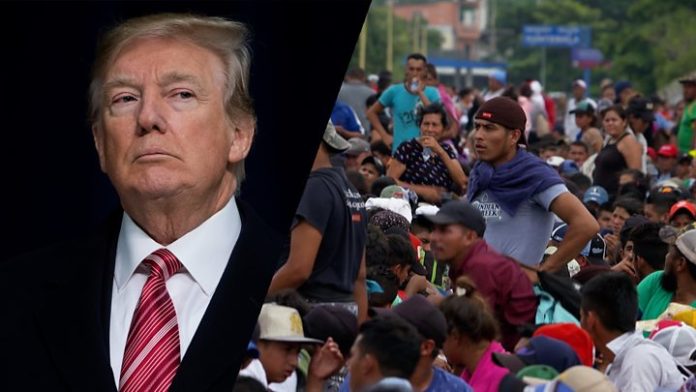 After saying nothing about the immigrant caravan from Central America since the GOP took a shellacking in the midterm election, President Donald Trump broke his silence on the issue Friday evening with two tweets:

Isn’t it ironic that large Caravans of people are marching to our border wanting U.S.A. asylum because they are fearful of being in their country – yet they are proudly waving….

….their country’s flag. Can this be possible? Yes, because it is all a BIG CON, and the American taxpayer is paying for it!

There’s a lot to unpack there, but let’s take a shot at it.

First of all, for anyone traveling in a foreign country to be carrying an American flag would not only be bizarre, it could also be a security threat to them and their fellow travelers.

Secondly, while these immigrants are leaving their home country, that doesn’t mean they don’t still feel warmly towards their birthplace. What person wouldn’t?

How exactly is this all a BIG CON? The only thing American taxpayers are forced to pay for is the needless deployment of thousands of U.S. troops to the border, a move that was totally unnecessary and only done as a political stunt in the closing days of the election by a craven president who thought he could rely on fear to motivate his political base.

The reaction to Trump’s latest blathering about the caravan drew plenty of comments from others on Twitter:

I’m fearful of being in my country because of you, but I’m still an American…is that a con too, or wait- the con is really just you. #everyoneknows #yousuck #sorrynotsorry

Wait … I thought you forgot about the caravan? Amazing how this is the first we’ve heard of it since the elections. Why don’t you go visit the troops at the border on thanksgiving? You know the ones there that won’t be with their families this holiday. Since…

Isn’t it “funny” 6,000 troops sit at the border waiting for an “invasion” while there is loss of life and property in California . Your priorities are screwed up!

When Norway was occupied by the nazis, our flag was our pride also when we sought refuge in other countries. I don’t see why its different when asylum seekers come from countries occupied by thugs and gangsters. They love their country, but not its leaders. Sounds familiar?

Hmmm.. just like US citizens. Even though we fear for our future and our children’s lives under your warped rule of law. We still love our country…our democracy. #ShameOnYou for demonizing their cry for help!

The big scam is all the money that the American taxpayer has already paid for in relation to @BetsyDeVosED @ScottPruittOK & @SecretaryZinke while they abuse their office.

Since the election is over with, Trump must be trying to distract us from something else. What could it possibly be? Does it start with the words Robert Mueller?