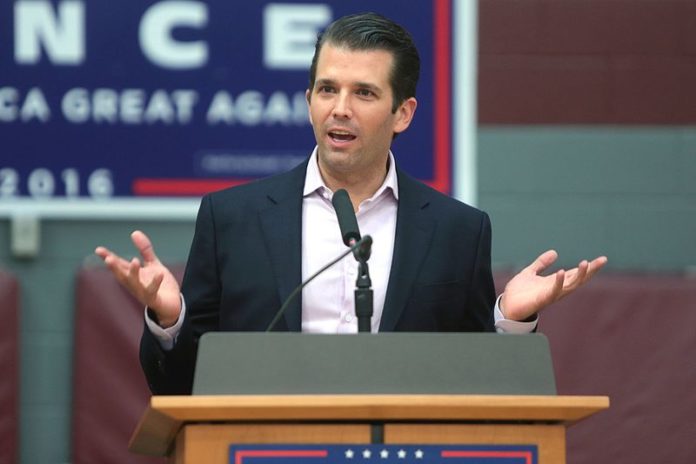 Donald Trump Jr. forced Twitter users to put him in his place on Monday by agreeing with his dad’s claim that no one in American history has ever been more mistreated than him.

During his interview with ABC host George Stephanopoulos on Sunday, President Donald Trump continued to play the victim card by absurdly complaining that he is the most mistreated person in all of America’s history.

“There’s never been a time in the history of our country where somebody was so mistreated as I have been,” Trump whined.

The next day, Trump Jr. concurred.

And that set off a firestorm of mockery as Twitter users replied with many history lessons demonstrating that millions of Americans, including former presidents, have been far more mistreated than Trump ever will experience in his miserable silver spoon life.

Recent history alone demonstrates that former President Obama suffered much mistreatment by conservatives who hurled racism and hate his way while refusing to compromise with him to pass legislation. They even criticized him for wearing a tan suit.

Other presidents have been treated even worse than that, such as Abraham Lincoln.

John F. Kennedy was also assassinated, as were James Garfield and William McKinley. Reagan narrowly survived being shot himself.

One Twitter user pointed out that Trump Jr’s own mother has been treated worse than his dad, by his dad.

I dunno, Jr, considering your dad publicly cheated on your mom w/anything that moved and bragged about it to every tabloid that would listen, not to mention she accused your dad of raping her in the divorce filing…maybe your mom?

Others noted that African-Americans suffered through being slaves and were victims of lynchings and KKK terrorism.

This Map Shows Over a Century of Documented Lynchings in the United States
Read more: https://t.co/z2stfvibzm
Give the gift of Smithsonian magazine for only $12! https://t.co/E0LBpd7ESw
Follow us: @SmithsonianMag on Twitterhttps://t.co/vkhkDqFwxN

Tell me to my face Martin Luther King Jr. had it better in the United States than Donald Trump.

Tell me to my face Japanese Americans locked in internment camps had it better than Donald Trump.

Native Americans were the victims of one of the worst genocides in history in this country.

Women have also suffered through a history of mistreatment.

Twitter users came up with even more examples for Trump Jr.

People sit in prisons on wrongful convictions for decades but, yeah, the guy who golfs every other day on the taxpayers dime has it bad.

John McCain lived in a hole and was tortured for five years.

Tell that to the Central Park Five… who your father whose lives your father helped make miserable. Still hasn’t apologized either.

So privileged and yet so thoroughly self-pitying. Whatever misery you suffer is at your own creation.

Clearly, Trump is not even close to being the most mistreated person in American history. He may be the biggest whiner though.