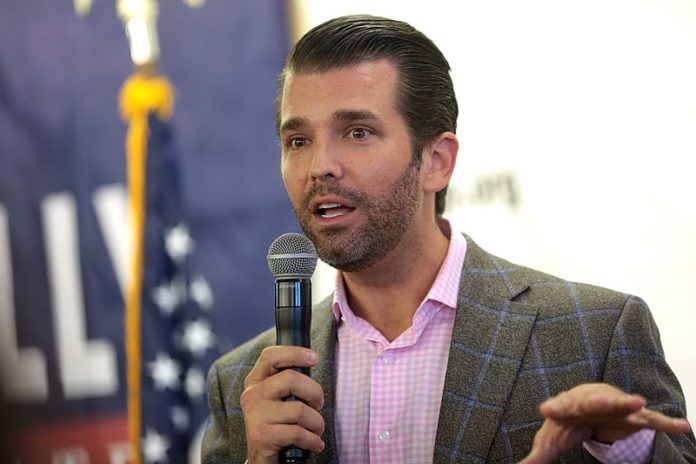 Donald Trump Jr. helped Republican lawmakers spread a vicious lie about a Democratic bill designed to make elections fairer and voting easier for Americans in an effort to turn the people against it.

Naturally, the bill is insanely popular according to multiple polls, which means Republicans hate it.

And that’s why three House Republicans attempted to amend the bill with an amendment addressing the non-existent problem of undocumented immigrants voting in national and state elections, which is already illegal, making the amendment redundant.

Today I offered a motion to recommit #HR1 reaffirming that only US citizens should have the right to vote.

Next time you go to the ballot box, keep that in mind. The future of their party is in cities like San Fran, where illegals can vote. Let that sink in.

I’m voting YES on this Motion to Recommit to add language to #HR1 recognizing that allowing illegal immigrants the right to vote devalues and diminishes the voting power of American citizens.

Votes Are In – #HouseDemocrats defeat motion to prevent illegal immigrants from voting in US elections 226-197. #RiggingElections #YourVoteDevalued

And then Trump Jr. joined in by spreading the lie.

What happened to the Democrat party that this is what they need to push to win? What does this do for Americans?

Of course, there is no such language in this bill whatsoever that gives undocumented immigrants the right to vote. This is more fear mongering by Trump Jr. and Republicans to make the bill less popular. And Twitter users called them out for it.

That’s not at all what it does. You’re just buying into the GOP fear mongering. This bill is an important measure to ensure fairer elections with less special interest influence and less opportunity for election fraud and voter suppression.

What’s even worse is the GOP making rules to prevent legal American citizens from voting.

House Republicans wanted to stick it to towns that allow non-citizens to vote in local elections (ex: school board). That got voted down.

This changes nothing about federal or state elections, where non-citizens weren’t eligible to vote in the first place.

The only one devaluing our vote is the GOP party Mr. Congressman! Please make is easier for all members of society to vote and abandon this foolish idea that vote fraud is rampant in America! #Electionholidayhttps://t.co/DXmO0olpE8

This is disgusting fearmongering and immigrant bashing. You’re making up fictional problems in order to use fear of immigrants for cheap political points. You’ve lost your moral compass. You should be ashamed of yourself.

Let me get this straight… You want to tack on a completely useless thing to a bill, just to say something about a thing that doesn’t exist. What are you even talking about? What would you say it is you do around here????

By “illegals” he means municipal voting by noncitizen legal residents. There is virtually no evidence of unauthorized residents voting in federal, state, and local elections. https://t.co/6UmOa2Y3Nc

If Trump Jr. and Republicans are working this hard to fear monger about a bill, you know it must be a fantastic piece of legislation that actually benefits the American people.