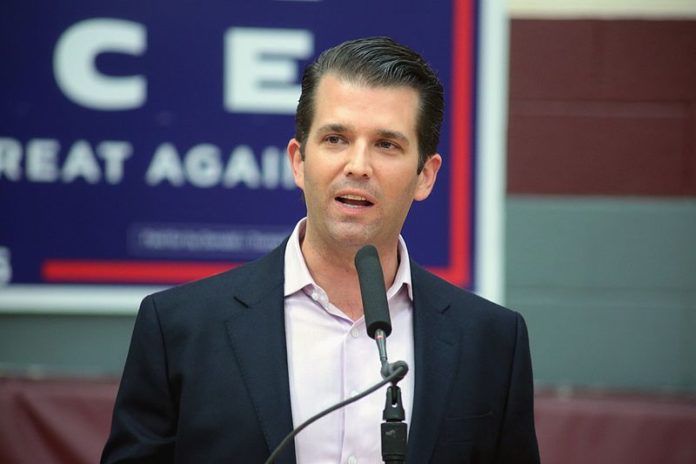 Donald Trump Jr. spread an outright falsehood on Friday when he claimed on Twitter that a fired journalists who once was awarded “Journalist of the Year” by CNN wrote 14 fake stories about his dad, President Donald Trump.

German journalist Claas Relotius fabricated 14 out of 60 stories he wrote during his seven years of work, which resulted in his immediate termination once his editors discovered the scheme.

Apparently, his fear of failing became so great after he achieved popularity in his home country that he felt the need to make up stories to maintain it.

“I am sick and I need to get help,” he told Der Spiegel. “It wasn’t because of the next big thing. It was fear of failing. My pressure to not be able to fail got ever bigger the more successful I became.”

Conservatives, however, immediately used the firing as evidence that CNN reports fake news about Trump, with Trump Jr. taking to Twitter to claim that all of Relotius’ fake stories were about his dad:

He literally said “I’m sick and need to get help”

You couldn’t make a Trump Derangement Syndrome better if you tried. #TDR #fakenews

But that’s a lie. It turns out that only one of Relotius’ stories was Trump-related.

According to Marketwatch, Relotius wrote a story about a rural town in Minnesota making it appear that all of Trump’s supporters in rural America are racists.

Again, it’s true the Relotius wrote 14 fabricated stories, and that CNN once named him “Journalist of the Year,” but Trump Jr. is lying by claiming that all of the stories were about his dad, and he is unfairly using the incident to smear CNN just as his dad has been doing since taking office. CNN has been good about retracting and correcting stories, and just because a journalist that doesn’t even work for CNN gets caught writing fake news, it doesn’t mean CNN peddles it.

Here’s the irony of your tweet about fake news stories: you made part of it up.

There weren’t 14 stories about Trump. There was one about Trump supporters.

This journalist is a German. He wrote one article about a town, where the majority voted for Trump. Other fake articles were not about Trump.

You can’t make this up folks. Days employed at CNN? Zero. Said working in Germany? All of them. Days until Donnie Jr indictment? Estimated at 17

I think you have a tad more to worry about than a lying journalist. Lying to Congress carries a steeper penalty than getting fired.

What an you idiot are, it’s not CNN.
It is a German magazine, he once worked for CNN. The fabricated articles were not about your father and and he was not associated with CNN at the time. Get things right and don’t spread fake news like your father does.

But not a CNN journalist. He worked for Der Spiegel in Germany. Please don’t add to the confusion of fake news yourself!

CNN said that Relotius “never worked for CNN. He was honored for a piece published by a Swiss magazine – more than 4 years ago.”

“It was sponsored by CNN but judged by an independent jury,” the insider said.

Lost his job at Der Spiegel. How’s your job at the Trump Foundation?

1 journalist does not equate to all journalists. Especially when your dad tells atleast 1 fabricated story a day.

Seriously, Trump Jr’s impending indictment can’t come soon enough. Then we won’t have to see any more of his slimy tweets.