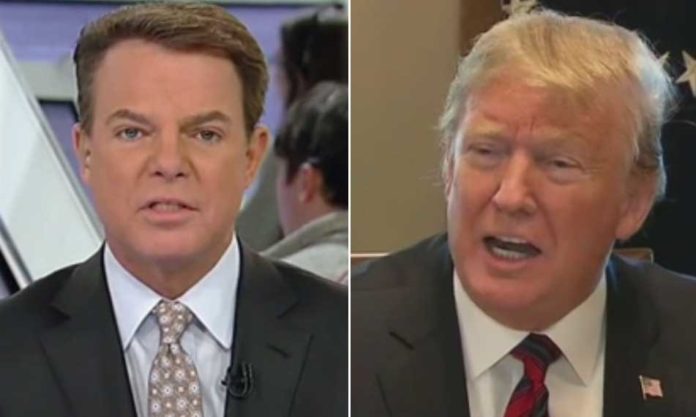 Having already defended Fox hosts Jeanine Pirro and Tucker Carlson earlier in the day on social media, President Donald Trump though he’d go for the Sunday trifecta and tell news anchor Shepard Smith that he should get a job at CNN:

Were @FoxNews weekend anchors, @ArthelNeville and @LelandVittert, trained by CNN prior to their ratings collapse? In any event, that’s where they should be working, along with their lowest rated anchor, Shepard Smith!

What exactly brought that on? Could it be that anyone on TV who refuses to constantly kiss Trump’s fat butt is automatically considered to be unworthy of having a different opinion by the thin-skinned head of state? Notice he never says anything negative about Sean Hannity, who is only too happy to serve as a prime time lap dog for the Megalomaniac-in-Chief.

There’s also the issue of why Trump feels the need to tell others how to run their business. He’s been a failure at his own real estate ventures (6 bankruptcies), so now he thinks he can run Fox News better than Rupert Murdoch? That’s pretty rich.

As you’d expect, the Donald got plenty of pointed barbs from others on Twitter. Take a look:

what kind of world is this where a befuddled old feeb can’t even enjoy a quiet Sunday afternoon covered in cheet-o dust while watching himself on television without being displeased by the propaganda wing of his own party? CRY HAVOC AND LET SLIP THE BIKERS FOR TRUMP

When Fox News turns against you and you feel the need to attack Fox news and you are a Republican, you know your presidency is in the toilet.

Subtle reminder that the current occupant of the White House is spending his day in bed yelling at the TV.

It’s getting scary. Even his own allies aren’t loyal enough. He’s attacking **Fox News** staff. Republicans have brought this upon themselves.

If Donnie is this deranged on Sunday, can you imagine what tomorrow is going to be like?