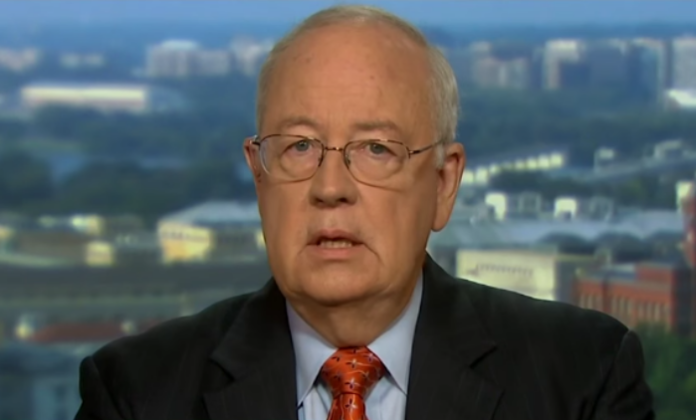 President Donald Trump is clearly watching Fox News because he just praised former Special Counsel Ken Starr for claiming that there’s “no evidence” of collusion and campaign finance violations even though Starr has no access to the evidence collected by Special Counsel Robert Mueller.

Trump has been freaking out all morning on Twitter over Michael Cohen flipping on him, even going so far as to revive a debunked lie that the FBI illegally broke into Cohen’s legal office despite the fact that agents had a warrant allowing them to do so.

But Trump demonstrated further just how desperate he is by referring to statements Starr made during an appearance on Fox News:

The problem is that Starr has absolutely no access to the evidence and Mueller’s team runs a tight ship. They certainly would never leak any information to Starr.

Nobody really knows what evidence of collusion Mueller has or doesn’t have because the Russia investigation has not been concluded and a final report has not been issued. Although, Mueller did clear out an entire floor of a federal courthouse this week for a mystery case this week, so who knows what bombshell is going to be next to drop. Even Starr acknowledged that things could change by cautioning us to “stay tuned.”

As for the campaign finance violations, Trump is an unindicted co-conspirator known as “Individual 1” in court documents after Cohen pleaded guilty to two campaign finance felonies that Trump allegedly coordinated with and directed Cohen to commit in order to hide extramarital affairs with two women from the American people as they prepared to vote in the 2016 Election.

In short, there’s plenty of evidence against Trump on the campaign finance violations. The indictments and plea deals prove it.

Twitter mocked Trump for his pathetic reliance on Starr as a lifeline:

Ken Starr has no idea what evidence there is because he’s no longer the special prosecutor. Turn off Fox News and begin settling your affairs. https://t.co/rMBu1v1knv

Ken Starr said this Friday 12/14/18 and he said “there’s been no evidence that he’s seen” and let’s stay tuned.” It’s pretty obvious he hasn’t seen any evidence because he’s not part of Mullers team. We won’t have answers until the investigation is done. Nice try! pic.twitter.com/5iKQbiLqgE

Lucky for us, Ken Starr is not conducting the investigation, Robert Mueller is. I’m betting Mueller’s finding will be quite different than a Fox News contributor.

Ken Starr has no idea what the Special Counsel has on you and your associates. There have been over 30 indictments with guilty pleas and convictions of many with direct connection to you! Be very concerned that Cohen has flipped big time. You’re going down. #UnfitToBePresident

and the same Ken Starr fired for covering up sexual assaults at Baylor? Hahahaha, yeah let’s take his word on something… NO!

Trump must be desperate and terrified if he has to resort to praising the opinion of a man who has no access to Mueller and the evidence in his investigation. And as a former judge and attorney, one would think Starr has the ability to read court documents, which clearly show there is evidence and witness testimony that Trump committed serious campaign finance violations.