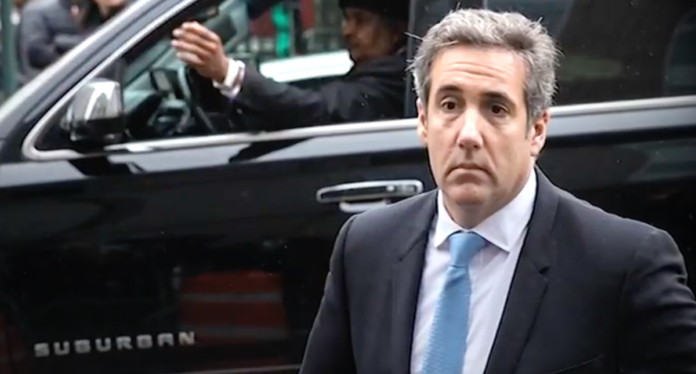 Cohen is dropping his lawsuits on the day after the parent company of the National Enquirer settled a lawsuit with the former Playboy model, Karen McDougal, who says she had a 10-month affair with Donald Trump.

This comes a week after the FBI raided his office and home as part of a criminal investigation.

Cohen is also trying to put another lawsuit on hold, as he is set to appear in federal court on Friday. BuzzFeed reported that Cohen wants to stall the Stormy Daniels’ lawsuit because it may “implicate his Fifth Amendment rights against self-incrimination” as he faces the other criminal investigation.

Dropping the lawsuit against BuzzFeed and Fusion GPS has many implications.

BuzzFeed responded to the news:

“Today’s news suggests that Donald Trump’s personal lawyer no longer thinks an attack on the free press is worth his time.”

It’s important to remember what the dossier alleges about Cohen since he dropped his case against it:

“A Kremlin insider highlighted the importance of Michael Cohen in the ongoing secret liaison relationship between (Trump) and the Russian leadership…According to the Kremlin insider, Cohen was heavily engaged in a cover-up and damage limitation operation in the attempt to prevent the full details of Trump’s relationship with Russia being exposed.”

Cohen claimed that the dossier falsely accused him of traveling to Prague to meet secretly with Russian agents tied to Putin. However, we learned almost a week ago that Mueller has evidence that Cohen was, in fact, in Prague, according to a McClatchy report on Friday.

Cohen’s move to drop his lawsuits seems timed to prevent the “discovery” and deposition process from moving forward in those cases, which prevents him from having to answer related questions in litigation, according to Natasha Bertrand, from The Atlantic.

Very interesting development: Cohen has dropped the libel lawsuits he filed against BuzzFeed & Fusion GPS over the dossier. Now won’t have to answer related questions in litigation. Comes days after McClatchy reported Mueller has evidence he was in Prague. https://t.co/mo8MBdcZAo

Cohen’s lawyers say they dropped the cases to focus on other events. Cohen’s attorney David Schwartz told BuzzFeed News that:

“The decision to voluntarily discontinue these cases was a difficult one. We believe the defendants defamed my client, and vindicating Mr. Cohen’s rights was — and still remains — important. But given the events that have unfolded, and the time, attention, and resources needed to prosecute these matters, we have dismissed the matters, despite their merits.”

Even if Cohen has picked his battles and will avoid answering questions regarding the now dropped BuzzFeed lawsuit, the criminal investigation and Stormy Daniels case will move forward.

Today’s news certainly presents the optics that Cohen has no leg to stand on against the free press or the Steele dossier.

See more in the video from MSNBC below:

BuzzFeed responded in a statement: "Today's news suggests that Donald Trump's personal lawyer no longer thinks an attack on the free press is worth his time." pic.twitter.com/wB0je4vKYO