The United States Blues
Home News Trump lover Kid Rock gets a** handed to him for insulting Democratic... 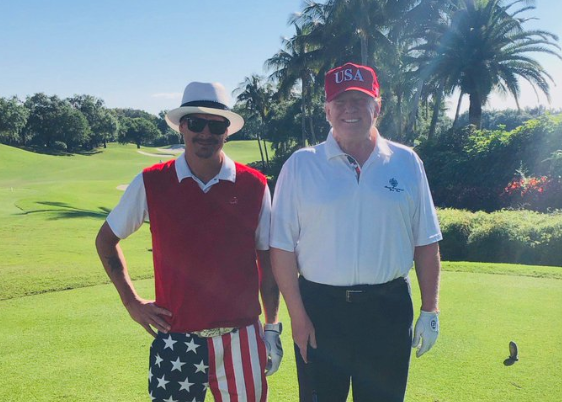 Washed up musician and President Donald Trump supporter Kid Rock viciously attacked superstar artist Taylor Swift on Twitter for being a Democrat on Friday. And it’s one of the biggest mistakes he ever made since deciding to get into the music industry.

Swift is set to be on the cover of the September issue of Vogue, which includes an interview with the singer in which she discusses her effort to be more politically active since Trump took office in 2017.

Well, Kid Rock lashed out at Swift for opposing Trump, whom he has played golf with while being a complete suck-up in an effort to be relevant.

In his attack, the Confederate flag aficionado accused Swift of performing sexual favors to break into Hollywood.

Taylor Swift wants to be a democrat because she wants to be in movies….period. And it looks like she will suck the door knob off Hollyweird to get there. Oldest move in the book. Good luck girl.

Never mind the fact that Kid Rock himself appeared in the film Joe Dirt, and one wonders what he had to do to get that bit part. Also never mind that there are lots of actors in Hollywood who have successful careers, not just Democrats.

Kid Rock’s insinuation is vulgar and sexist and he owes Swift an apology. Thus far, she has chosen not to respond, but many Twitter users spoke up in her defense and made sure that his attack would be a pox upon his trailer park.

Nah—the oldest move in the book is for racist, irrelevant hack musicians to take social media pot shots at actual talented superstars with moral compasses who are leveraging their fame to help people instead of bowing to a white supremacist President.

We see you, tiny.

Who knew Kid Rock was an insecure, self loathing, sexist bully who’d attack a 10 time Grammy award winning, (he has “0”) female artist, by suggesting she needs to perform a sex act w/ a man, to be successful? Just to make himself feel like a big “man”.??‍♀️ Now we all know!?

I would say you’re canceled but does anyone remember who you are?

I literally had to Wikipedia him: His name seemed vaguely familiar but I couldn’t place a single song or remember if he was famous for any good reason ??‍♀️

Literally any rock is better than Kid Rock. Fraggle Rock, Jailhouse Rock, the Rock, Chris Rock, a small rock that flew up from the road and cracked my windshield.

“Extra in ‘Joe Dirt’ has thoughts on Hollywood” pic.twitter.com/TE3D70tagh

Didn’t you sing about underage girls and statutory on the OSMOSIS JONES soundtrack? Clown.

Kid Rock, I am a lifelong fan. My daughter was also a victim of the gun violence in Parkland. This obnoxious tweet just put an end to it. You can use your platform if you want to create more hate and violence, I will use my platform to say thank you to @taylorswift13.

Seriously, Kid Rock really should shut up and spend more time trying to come up with an actually good song instead of spending his time attacking people who are far more popular than him. But what else can we really expect from a has-been Trump supporter who is desperate for attention?