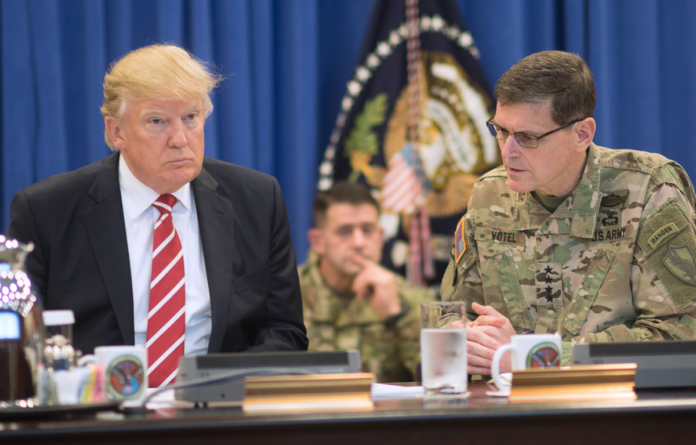 In an interview with the far-right news source that Steve Bannon once dubbed, “the platform for the alt-right,” Breitbart, Donald Trump seems to have casually suggested violence and war against his critics on the left. Is this a suggestion that could translate to asking for civil war in the event that Trump is impeached following the release of the Mueller report at any moment now?

Washington correspondent for the Toronto Star, Daniel Dale, noted this quote from Trump in his exclusive interview with Breitbart in the Oval Office. The interview went on for “more-than-40-minutes” on Monday afternoon.

For more context, Dale goes on to point to the article in question:

“For those asking for more context: Breitbart says the quote came as Trump was arguing that the left plays politics in a more ‘vicious’ manner than his side, even though ‘the tough people’ are on his side. Here’s the link.”

For those asking for more context: Breitbart says the quote came as Trump was arguing that the left plays politics in a more "vicious" manner than his side, even though "the tough people" are on his side. Here's the link. https://t.co/7LPLaHqBZJ

Attorney and professor Seth Abramson called out what the message of the quote really seems to lightly conceal, a call to civil war.

“What the *hell*? Did Donald Trump just reference *civil war*? Like, casually?”

What the *hell*? Did Donald Trump just reference *civil war*? Like, casually? https://t.co/eKeR2UDp1i

As one person who commented pointed out, Michael Cohen, Trump’s former “fixer,” recently stated in his public testimony to Congress that Trump has a habit of speaking in code.

“’He doesn’t give you questions, he doesn’t give you orders, he speaks in a code. And I understand the code, because I’ve been around him for a decade,’ testified Cohen, Trump’s former longtime personal attorney.”

Would it be far-fetched to say that Trump is calling on his “tough people” to wage violence against liberals in America? The quote in question came up as part of a conversation about how the left is more “vicious” and also how they play “cuter and tougher.”

“So here’s the thing—it’s so terrible what’s happening,” Trump said when asked by Breitbart News Washington Political Editor Matthew Boyle about how the left is fighting hard. “You know, the left plays a tougher game, it’s very funny. I actually think that the people on the right are tougher, but they don’t play it tougher. Okay? I can tell you I have the support of the police, the support of the military, the support of the Bikers for Trump – I have the tough people, but they don’t play it tough — until they go to a certain point, and then it would be very bad, very bad. But the left plays it cuter and tougher. Like with all the nonsense that they do in Congress … with all this invest[igations]—that’s all they want to do is –you know, they do things that are nasty. Republicans never played this.”

Earlier this month, Donny Deutsch, a longtime Trump acquaintance, warned that Trump may start a civil war if he is either impeached or thrown out of office in 2020. Likewise, Michael Cohen warned during his testimony that he feared that Trump will not peacefully relinquish the White House is he loses the election next year.

“I fear that if he loses the election in 2020, that there will never be a peaceful transition of power. And this is why I agreed to appear before you today,” Cohen said of Trump.

Deutsch agrees with this assessment:

“We will not have a peaceful transition,” Deutsch said. “Donald Trump, I believe, whether he’s going to be impeached, whether they’re disqualifying him for running for office, even if he gets elected out — he will tell his people to take to the streets. I know that sounds extreme, but that’s who this man is.”

Sounds like Trump has escalated his theatrics from civil war to an all-out coup? https://t.co/DWcgLWbKlD

Trump is now down to threatening civil war. He'll find the military obeys the Joint Chiefs, who obey the Constitution. 4-F's with fake bone spurs don't know how it works. https://t.co/Xjy3x93HTI