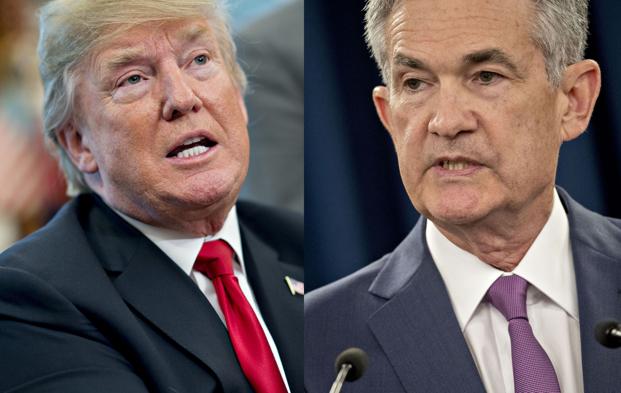 President Donald Trump, upset by the falling stock market caused by his global trade war and disastrous tax cut for the richest Americans, is seriously discussing firing the Chairman of the Federal Reserve, Jerome Powell, whom he appointed to the post.

“Advisers close to Trump aren’t convinced he would move against Powell and are hoping that the president’s latest bout of anger will dissipate over the holidays, the people said on condition of anonymity. Some of Trump’s advisers have warned him that firing Powell would be a disastrous move.”

The Dow Jones Industrial Average fell another 400 points on Friday to end its worst week in a decade. The tech-heavy NASAQ also plunged precipitously, leading many financial experts to say the bear market has arrived. The government shutdown has also caused uncertainty and may have contributed to Friday’s dramatic drop.

And dumping the Fed chief would likely only destabilize financial markets even further, Bloomberg notes:

“Any attempt by Trump to push out Powell would have potentially devastating ripple effects across financial markets, undermining investors’ confidence in the central bank’s ability to shepherd the economy without political interference.”

What Trump neglects to realize is that interest rate hikes aren’t just decided by the Fed chair. The Federal Open Market Committee has 12 members and sets the nation’s monetary policy. So removing Powell wouldn’t guarantee that there would be no more rate hikes in the future.

It should surprise no one that the American economy and stock market are now on the verge of a recession. After all, the president is a man who filed for bankruptcy on six different occasions over the course of his career. He even failed to make money with casinos in Atlantic City despite the fact that casinos are virtually guaranteed to succeed.

While it’s unlikely Trump will actually fire Powell, a man as unstable as this president is capable of anything.