The United States Blues
Home News Trump Mocks ‘Dumb’ Sean Hannity Behind His Back For Being A Suck... 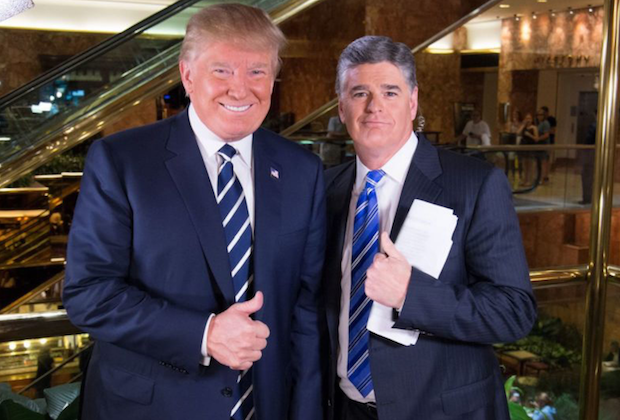 Fox host Sean Hannity worships President Donald Trump with a slavish devotion that borders on being obscene. But it turns out that while Trump enjoys the free publicity Hannity gives him, he doesn’t exactly share the same level of admiration.

A new report from The Daily Beast suggests that Trump actually thinks Hannity is a suck up, and he frequently mocks the Fox host:

“Trump has repeatedly—and sometimes for a sustained period of time—made fun of Hannity’s interviewing skills, usually zeroing in on the low-quality laziness of the host’s questions, the three people with direct knowledge tell The Daily Beast.

“‘It’s like he’s not even trying,’ Trump has said, one source recalled, right before the president launched into a rough imitation of Hannity’s voice and mannerisms to complain that the questions about how ‘great I am’ give him nothing to work or have fun with.”

On the eve of the recent midterm election, Hannity even showed up at a Trump rally, ostensibly to interview the president, but he wound up doing more than just conducting an interview:

“In the middle of the political rally, the president called Hannity onstage anyway and told him to come up to the mic—which Hannity did to campaign with the president he supposedly just covers on air.”

The next day, Fox News issued a statement which read:

“Fox News does not condone any talent participating in campaign events. We have an extraordinary team of journalists helming our coverage tonight, and we are extremely proud of their work. This was an unfortunate distraction and has been addressed.”

Trump has even gone so far as to call Hannity’s softball questions “dumb” while discussing him with White House staffers:

“Another person who’s heard Trump make similar comments since his inauguration says they remember the president calling Hannity’s softball questions ‘dumb.’ This source recalled a round of ripping on the TV talker’s interview style and cloying devotion to Trump that lasted long enough that the source glanced at their watch and started feeling sorry for Hannity.”

Sounds like Hannity is being played by the Con Man-in-Chief. Then again, Trump has been scamming people his entire life.