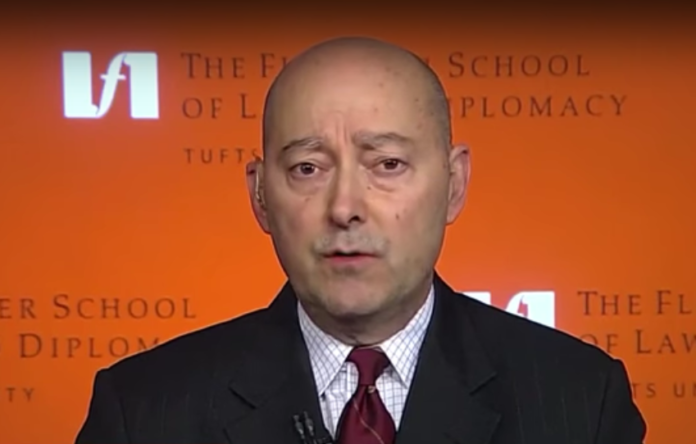 Another decorated former military commander is sounding the alarm over President Donald Trump’s refusal to stand up to Russian President Vladimir Putin.

On Friday, retired four-star Army General Barry McCaffrey “reluctantly” referred to Trump as a “serious threat” to national security in a stunning post on Twitter.

Reluctantly I have concluded that President Trump is a serious threat to US national security. He is refusing to protect vital US interests from active Russian attacks. It is apparent that he is for some unknown reason under the sway of Mr Putin.

McCaffrey is one of the most decorated Army officers in American history, having served in Vietnam where he earned three Purple Hearts, two Silver Stars, and two Distinguished Service Crosses before going on to serve in the Clinton Administration. McCaffrey is currently an MSNBC military analyst, so the American people should take his remarks on Twitter seriously.

But McCaffrey isn’t the only military commander who is warning the public about Trump this week.

During an appearance on MSNBC to discuss the firing of FBI Deputy Director Andrew McCabe and the recent firing of Secretary of State Rex Tillerson, retired Navy Admiral James Stavridis expressed his support of McCaffrey and his endorsed his conclusion.

“I know the general well. I have a lot of regard for his opinions, he does not state them loosely.”

“In terms of the current situation with Russia, our president needs to understand that Vladimir Putin is no friend to the United States, that Russia is actively seeking to undermine our nation not only domestically but our foreign policy as well.”

He went on to point out that Russia invaded Ukraine and illegally annexed the Crimea and has been launching cyber-attacks against the United States to weaken our democratic institutions and sway the public with propaganda.

“I agree with Gen. McCaffrey that our president does not spend enough time focused on the threat that is emanating from Russia today.”

America should also take Stavridis’ assessment seriously. He served over 30 years in the military. Over the course of his career, he served as commander of U.S Southern Command, U.S. European Command, and NATO Supreme Allied Commander Europe. He was the first Navy officer to hold these positions and holds a doctorate in Law and Diplomacy from the Fletcher School, where he currently serves as Dean.

Interestingly enough, Trump considered Stavridis for Secretary of State as well. Stavridis certainly dodged a bullet by not being nominated.

Stavridis and McCaffrey know what they are talking about, and we should all take their warnings seriously.

Trump is a national security threat.

Putin and Russia seem to have what amounts to a puppet in the White House, and Americans need to do something about it before it really is too late.