The United States Blues
Home News Trump offered NASA unlimited budget to get to Mars by 2020 —... 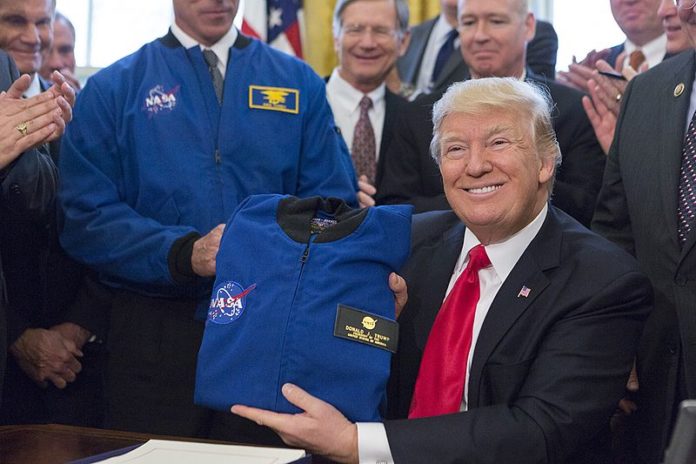 President Donald Trump humiliatingly begged NASA to send a manned mission to Mars by the end of his first term, forcing NASA to (politely) humiliate the science-illiterate chief executive.

It all started on the day Trump made a complicated televised phone call from the Oval Office to the International Space Station to congratulate astronaut Peggy Whitson for becoming the American who has spent the most time in space.

During the call, Trump asked Whitson out of the blue her opinion on when we could send a human mission to the red planet.

“Tell me, Mars — what do you see a timing for actually sending humans?” Trump asked.

“Well, I think as your bill directed, it would be in the 2030s,” Whitson replied, literally reminding Trump that space travel is hard and that he had recently signed a bill outlining a clear timeline. “Unfortunately spaceflight takes a lot of time and money, so getting there will take some international cooperation.”

“Well, I think we want to do it in my first term or at worst in my second term,” Trump said, clearly not taking no for answer despite Whitson’s expert opinion. “So I think we’ll have to speed that up a little bit.”

Seriously, that was in April 2017, and Trump somehow expected NASA to throw together a manned mission to Mars in under three years.

Oh, but it apparently was even worse than that because Trump had already been humiliated earlier just before the phone call began.

You see, the phone call was very public so we think that’s all there was to it. Trump asked a science-illiterate question and got shot down only to ignore the answer.

But while Trump was preparing for the phone call, Sims recounted what happened during a briefing with NASA administrator Robert Lightfoot.

He asked: “What’s our plan for Mars?”

Lightfoot explained to the president — who, again, had recently signed a bill containing a plan for Mars — that NASA planned to send a rover to Mars in 2020 and, by the 2030s, would attempt a manned spaceflight.

“Trump bristled,” according to Sims. He asked, “But is there any way we could do it by the end of my first term?”

Sims described the uncomfortable exchange that followed the question, with Lightfoot shifting and placing his hand on his chin, hesitating politely and attempting to let Trump down easily, emphasizing the logistical challenges involving “distance, fuel capacity, etc. Also the fact that we hadn’t landed an American anywhere remotely close to Mars ever.”

According to IFL Science:

The average distance between Earth and Mars is 225 million kilometers (140 million miles) away. This is over 590 times further than any human has gone before. The trip it is expected to last two years in total, most of which would be spent in deep space with no protection from cosmic rays and most likely no way to help the astronauts if something goes wrong.

On top of those difficulties, the US currently does not have rockets or spacecraft that can deliver humans to low-Earth orbit, let alone to Mars. And that also goes for private companies.

Instead of conceding that science won’t yet allow humans to make it to Mars without serious preparation and years of it, Mr. Climate change isn’t real because it’s snowing and cold outside though he could just throw money at the problem to make it go away so he could take credit for an achievement similar to former President John F. Kennedy’s moonshot speech in 1961 that inspired the United States to put a man on the moon, something that would not be realized until Neil Armstrong took the first step and giant leap on the lunar surface in 1969 eight years later.

“But what if I gave you all the money you could ever need to do it?” Trump asked. “What if we sent NASA’s budget through the roof, but focused entirely on that instead of whatever else you’re doing now. Could it work then?”

First of all, Congress would need to approve such funding and it would likely never pass. Trump has no authority whatsoever to give NASA an unlimited budget. It appears Trump understood at the time that he’s probably not going to win a second term and will have few, if any, actual achievements to brag about. Landing a human mission on Mars would be big deal.

Second, NASA is so much more than space travel. All sorts of science experiments and studies are taking place. Boiling it down to one single goal while disregarding the other good scientific developments NASA is working towards is foolish.

Needless to say, Trump was “visibly disappointed” after Lightfoot explained that Mars will not happen by 2020, and probably won’t happen while he’s in office. And if it did, the chances of astronauts dying in deep space or on the surface of Mars would be exceedingly and unacceptably high because of lack of proper preparation, planning and technological advances.

Besides, former President Obama already gave the “Mars shot” speech two years ago, and signed a law in 2010 setting up the timeline for a manned mission to Mars by the 2030s.

Yeah, you read that right. Obama already did it, so Trump is desperate to take credit for it by making it happen sooner.

This is what happens when a shallow and jealous man occupies the White House.