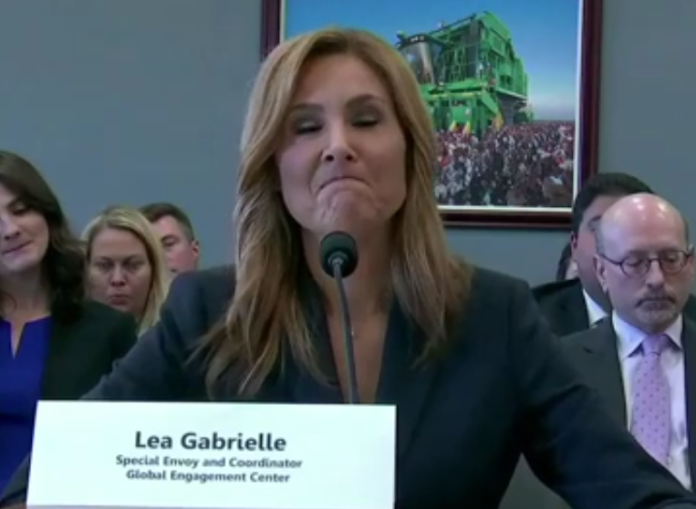 A former Fox News employee who now works at the State Department as one of President Donald Trump’s top officials demonstrated her unfitness to do the job this week during a House hearing in which she could not name specific Russian propaganda efforts.

During a House Appropriations Committee on “United States Efforts to Counter Russian Disinformation and Malign Influence,” Lea Gabrielle testified about the threat Russia poses to our country and democracy around the world.

“It is clear that the Kremlin has been attempting to damage America’s credibility among our allies and our partners, undermine trans-Atlantic unity, and to sow discord in target societies,” Gabrielle said. “They covertly plant false stories.”

But then Rep. Lois Frankel (D-Fla.) asked her for examples, and Gabrielle’s mind all of a sudden went blank, assuming it was not already blank long before she ever joined the State Department. After all, she worked at Fox News.

“What are the tales that they are telling, their fake news. What do you see?” Frankel asked. “Give me a couple of examples of fake stories. Because we’ve been talking in generalities, I’d like to know what kind of information they’re spreading. What are they saying, for example?”

It’s not like Gabrielle did not have many examples to choose from. Russia is currently spinning tales about upheaval in Venezuela and claims that NATO is preparing for war against Russia and other lies about NATO partners. Russia also spread much propaganda in the United States, particularly about the murder of Seth Rich and used racism to spread discord through social media platforms.

Yet, she couldn’t name even one specific instance.

“Well, it really depends on the country,” she sputtered.

All Gabrielle could do is vocalize a drawn-out “Ummmm” before another official had to step in and fill in the blanks.

Here’s the video via ABC:

Clearly, the Trump administration is not doing enough to protect us from the threat of Russian propaganda and misinformation as the 2020 Election approaches. Because doing something about it means being able to testify on what Russia has already done and is doing now. And Gabrielle clearly could not do that, and that’s supposed to be her job.

If this is the talent and knowledge level of our top officials in charge of dealing with this problem, Russia clearly has an advantage they will exploit.