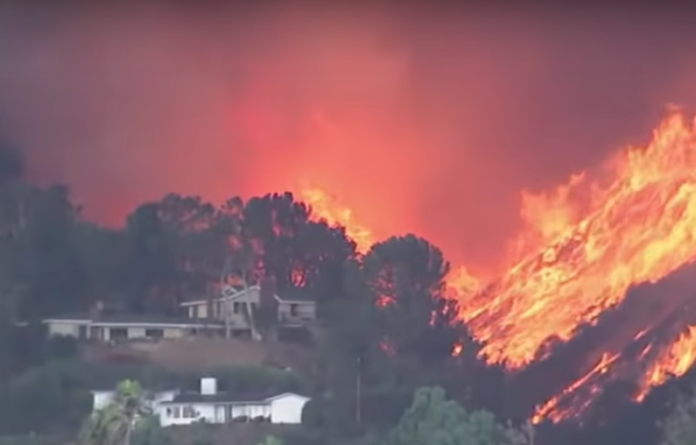 President Donald Trump briefly pretended to care about those affected by wildfires in California on Saturday night before returning to blaming them for it on Sunday morning in yet another rant about forest management.

After refusing to stand in the rain to honor fallen American soldiers killed during World War I, Trump spent his “executive time” tweeting about the wildfires and seemed to actually give a damn.

These California fires are expanding very, very quickly (in some cases 80-100 acres a minute). If people don’t evacuate quickly, they risk being overtaken by the fire. Please listen to evacuation orders from State and local officials!

More than 4,000 are fighting the Camp and Woolsey Fires in California that have burned over 170,000 acres. Our hearts are with those fighting the fires, the 52,000 who have evacuated, and the families of the 11 who have died. The destruction is catastrophic. God Bless them all.

But it didn’t take long for him to resume blaming California for the wildfires, repeating his previous claim that poor forest management is the cause.

With proper Forest Management, we can stop the devastation constantly going on in California. Get Smart!

Of course, Trump is the one who slashed the Forest Service budget, which includes forest management and wildfire prevention.

And when Trump previously proposed that lack of tree cutting is the cause of wildfires, science smacked him down.

In fact, Trump own Secretary of the Interior Ryan Zinke accidentally admitted that climate change is the cause.

Wildfires are burning hotter and more intense due to drier and hotter conditions and due to a buildup of dead and dying timber. Read my piece in @USATODAY about what we can and are doing to help fight and prevent these fires from growing out of control. https://t.co/2JiDlF0GJf

It should also be pointed out that these fires have nothing to do with forest management, according to the Pasadena Fire Association.

Mr. President, with all due respect, you are wrong. The fires in So. Cal are urban interface fires and have NOTHING to do with forest management. Come to SoCal and learn the facts & help the victims. Scott Austin, Pres IAFF 809. @IAFFNewsDesk https://t.co/d3jY0SeosF

Trump and his team are clearly trying to use these wildfires as an excuse to let loggers gut forests for profit. The Forest Service already removes dead trees, thins out forests, and does controlled burns to prevent the kind of wildfires we are seeing in California. The problem is that climate change has made conditions hotter and drier and Trump’s budget cuts have prevented the Forest Service from being able to do their jobs efficiently. The budget also does not provide enough funding for firefighting services.

If Trump really wants to help California, he should increase the budget for these services and do more to prevent and reverse climate change. Denying science and victim-blaming are not helping at all.

ABOUT US
Lefties, Liberals, Progressives, Social Justice Warriors, Old Hippies, Concerned Millenials, Reformed Republicans and Democrats of Whatever Stripe – Welcome Home! We offer aggregated news – which means our writers credibly source and report on the news of the day. In all fairness, our team leans left and may editorialize from time to time but we are committed to giving you the facts. No tin-foil hat conspiracy theories here! Our Activism Resource Database is second to none and covers the spectrum from Animal Rights to World Peace (there were no categories that begin with Z). We make every effort to give you the most current information on ways you can make a difference. Whether you are an Armchair Activist or Full-Blown Social Justice Warrior we have something for you.
Contact us: [email protected]nitedstatesblues
FOLLOW US
© 2019 TheUnitedStatesBlues.com
This website uses cookies to ensure you get the best experience on our website. Learn more.