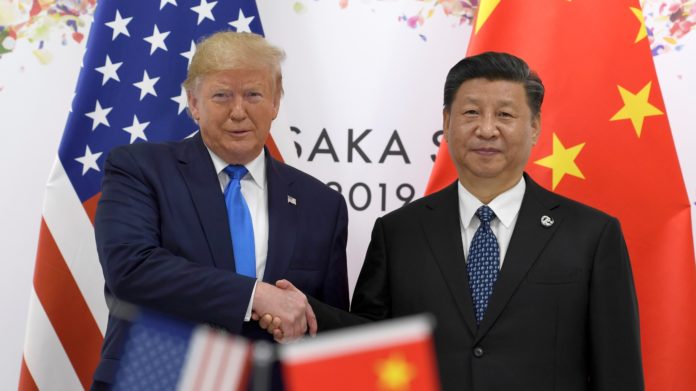 In response to a new round of retaliatory tariffs China imposed on $75 billion worth of U.S. goods — including U.S. automobiles and auto parts — President Donald Trump “ordered” American companies to find “alternatives” to doing business with China.

In a series of increasingly angry tweets, Trump lashed out at the latest move by China, suggesting that the United States would be “better off” if it didn’t trade with the second-largest economy in the world:

Our Country has lost, stupidly, Trillions of Dollars with China over many years. They have stolen our Intellectual Property at a rate of Hundreds of Billions of Dollars a year, & they want to continue. I won’t let that happen! We don’t need China and, frankly, would be far….

….better off without them. The vast amounts of money made and stolen by China from the United States, year after year, for decades, will and must STOP. Our great American companies are hereby ordered to immediately start looking for an alternative to China, including bringing..

….better off without them. The vast amounts of money made and stolen by China from the United States, year after year, for decades, will and must STOP. Our great American companies are hereby ordered to immediately start looking for an alternative to China, including bringing..

….your companies HOME and making your products in the USA. I will be responding to China’s Tariffs this afternoon. This is a GREAT opportunity for the United States. Also, I am ordering all carriers, including Fed Ex, Amazon, UPS and the Post Office, to SEARCH FOR & REFUSE,….

….all deliveries of Fentanyl from China (or anywhere else!). Fentanyl kills 100,000 Americans a year. President Xi said this would stop – it didn’t. Our Economy, because of our gains in the last 2 1/2 years, is MUCH larger than that of China. We will keep it that way!

Trump cannot order any company to do anything, and he certainly can’t force U.S. businesses to obey his specious edict, as even Fox News host Chris Wallace noted Friday:

“I don’t think the president can order a car company to move some of its factories from one place to another. He could impose tariffs or make it economically untenable, but he can’t sit there and order the CEO of the board — and my guess is most people in this country wouldn’t want to see the president be able to do this.”

Wallace then noted that Trump’s toxic tweeting about the trade war and U.S. economy are only making things worse:

“When you have the president of the United States sort of flailing around this way and ordering companies to move back to the U.S. and saying that the head of the Federal Reserve is the enemy of the country, is that going to create more consumer confidence about the state of the economy or not?”

There’s an old saying that Donald Trump needs to be aware of and certainly applies in this situation with the U.S. and world economy on the verge of meltdown as a direct result of his actions: You break it, you bought it.