The United States Blues
Home News Trump Organization admits Trump is profiting off the military staying at his... 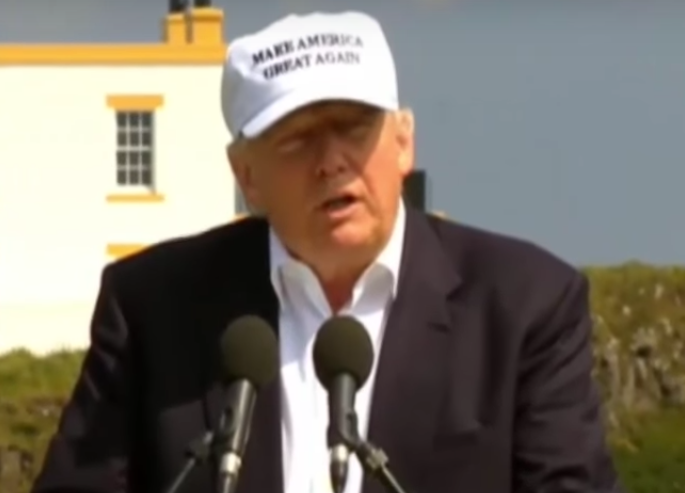 President Donald Trump is once again under fire for using the office he holds to enrich himself at taxpayer expense, and the Trump Organization is admitting it as the House Oversight Committee investigates.

Back in June, the committee demanded documents from the Pentagon concerning bizarre stopovers at the Prestwick Airport near Trump’s Turnberry resort in Scotland over the last two years by the Air National Guard.

The National Guard has been landing planes at the airport for refueling and staying at the resort, all on the taxpayer dime at the cost of $11 million that is clearly designed to prop up Trump’s struggling business. The revelation of the corruption comes on the heels of Trump forcing Vice-President Mike Pence to stay at his Ireland resort during a recent overseas trip.

United States military personnel have occasionally stayed at the Trump Turnberry golf resort in Scotland while Defense Department planes stop over and refuel at the nearby airport.

So far, the Pentagon has refused to hand over any documents, thus hiding Trump’s illicit activities.

Using the military to make a profit for private businesses is a complete violation of ethics rules and the Constitution. This is precisely why Trump has been criticized for not divesting himself from his businesses. It’s also, of course, why he didn’t. Because he wanted to use the presidency for profit.

Every time he visits one of his golf courses, it costs taxpayers millions of dollars. In fact, the price tag paid by taxpayers so far is over $110 million.

However, while Trump and the Pentagon aren’t talking, the Trump Organization is, and it’s quite an admission.

“A representative for the Trump Organization confirmed Saturday that United States military personnel have occasionally stayed at the Trump Turnberry,” the New York Times reported. “But the representative said that it happened only a few times a year and that the company was charging the government a discounted rate.”

It doesn’t matter what the rate was, taxpayers are still on the hook for the bill. And money is going right into Trump’s pockets. It’s especially wasteful when one considers there’s already a military air base conveniently located that would offer refueling and lodging at cheaper costs.

This is nothing but a scheme to keep the airport up and running because Trump’s resort relies on it staying in business. But the president should not be picking winners and losers in this way, especially when it benefits him financially.

This is a scandal, a complete breach of taxpayer trust, which Trump had already violated long ago. He should have to pay back every penny he took from taxpayers, and this corrupt scheme should trigger an impeachment inquiry.