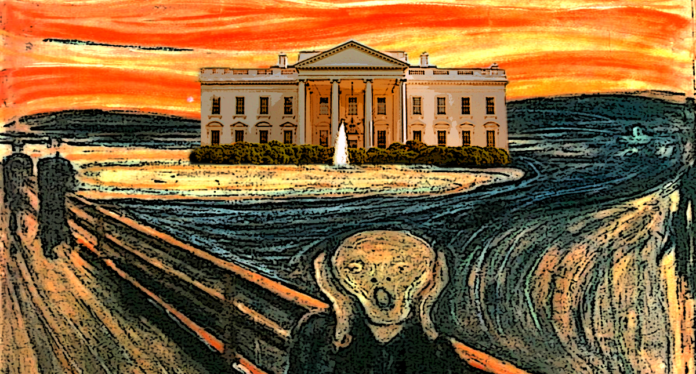 The White House revolving door is in overdrive, as Trump considers replacing or switching out positions for at least four senior administration officials. Secretary of State Rex Tillerson was among the latest casualties abruptly fired by Trump on Twitter, hours after he criticized Russia for poisoning a British ex-spy and his daughter in Britain. He joins a list of 5 high profile officials to have been fired or to have resigned in the last two weeks alone.

It’s almost impossible to keep up with all the turnover, but here are 5 of the latest to leave the Trump administration:

There are also reports that Trump, through Attorney General Jeff Sessions may fire former FBI Deputy Director Andrew McCabe days before his retirement on March 18, which would strip him of his pension after 20 years at the bureau. McCabe is, at the time of this writing, at the Justice Department, pleading his case, as he nears his 50th birthday.

If Sessions fires McCabe, it will be a despicable and vindictive affront to anyone with a sense of decency. Unless there is something more at play…

Doesnt seem a stretch to interpet today's stories as the President giving Sessions an ultimatum: fire McCabe or lose your job.

“There’s a lot of chaos and anarchy, and this is just more of it,” said Charlie Dent. (R-PA). “This type of instability and uncertainty is really not helpful for America or for the administration.” he continued.

Axios suggests things are “crazy,” as Trump considered moving people around and replacing others:

“Yesterday was crazy. The rumor mill was in overdrive with reports that President Trump could replace as many as four senior administration officials, including a Scott-Pruitt-for-Jeff-Sessions switcheroo at Justice.”

If Trump does remove Sessions, it would be an apparent strike on the Russia investigations, but Trump is apparently annoyed with just about everyone. That includes John Kelly, H.R. McMaster, Jeff Sessions, and Secretary David Shulkin.

NEW: Trump has discussed a plan to fire Attorney General Jeff Sessions and replace him with EPA Administrator Scott Pruitt, according to two Republicans in contact with the White House https://t.co/UZDwGBmJhi

Although he has done nothing to dispel rumors he might go on another “You’re fired!” binge, he also hasn’t got a concrete plan to replace those who have left the proverbial building. All we know is he’s “in a mood for change” and “fed up.” We can all relate to that because we are all beyond seriously questioning the conduct of Trump. This is neither a stable nor a functional American government.

“To find out you’ve been fired by Tweet is really not reassuring, in terms of the conduct of government,” said Senator Jeff Flake (R-AZ)

What’s more, Trump seems to thrive on the Reality TV gossip mill vibe he’s most familiar with and doesn’t care if people he talks to share what’s going on, despite the strong statements he’s repeatedly made about “leakers” in the past.

“In Trumpworld, there’s no such thing as a secret — or prior planning,” says Jonathan Swan.

The report also suggests that Trump might have picked his next top economic adviser, Larry Kudlow, after seeing him on television, and that he told him he was “very handsome.”

“The president called and he said: ‘It’s out. … You’re on the air. … I’m looking at a picture of you. … Very handsome! So Trumpian! ” Kudlow told CNBC

Larry Kudlow Describes How Trump Buttered Him Up: Told Me I Looked 'Very Handsome' on TV (VIDEO) https://t.co/poCXkJSycE pic.twitter.com/la7OAILLVh

Although Trump seems to be on a rampage to get rid of “dead weight,” he might want to stop and consider that all of these changes suggest that he is panicking about the investigation and plans to hide behind the loyalists he is hiring.

Perhaps Trump should take a long look in the mirror and say, “You’re fired!” Most of America would sincerely appreciate the self-reflection, and it would be one of the most patriotic things he could do for America’s future at this point.

Instead, it looks like Trump wants to call it all “Fake News”:

The new Fake News narrative is that there is CHAOS in the White House. Wrong! People will always come & go, and I want strong dialogue before making a final decision. I still have some people that I want to change (always seeking perfection). There is no Chaos, only great Energy!

See more about the chaos in the White House below: