The United States Blues
Home News Trump: People are dying ‘all over the country’ because Nancy Pelosi won’t... 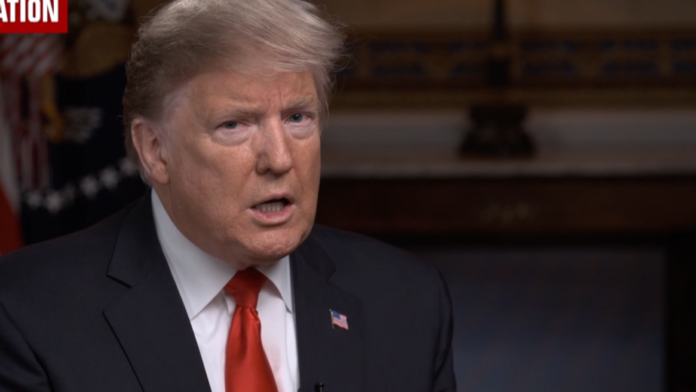 President Donald Trump is accusing Speaker of the House Nancy Pelosi (D-CA) of negligence for failing to give him billions of dollars for his long-promised border wall, going so far as to suggest that Americans are dying “all over the country” as a result of Pelosi’s refusal to fund the president’s vanity project, which he previously promised Mexico would pay for.

In an interview with Margaret Brennan of the CBS News show “Face the Nation,” Trump also alleged that Pelosi knows a wall is needed:

“Well, I think that she was very rigid — which I would expect — but I think she’s very bad for our country. She knows that you need a barrier. She knows that we need border security. She wanted to win a political point. I happen to think it’s very bad politics because basically, she wants open borders. She doesn’t mind human trafficking or she wouldn’t do this.”

Trump also suggested that Pelosi is doing a “terrible disservice to our country,” adding:

As per usual with the notoriously fact-free president, Trump offered no evidence to support his specious allegations against the House Speaker.

“The president knows, bluster aside, that Democrats are committed to securing our borders while upholding our values as a nation. The president should stop undermining bipartisan efforts to do just that.”

Hammill also noted that Trump had made the country less safe with the recent government shutdown during which hundreds of thousands of border patrol officers were forced to work for 35 days without a paycheck:

The interview Trump gave to Brennan will air on “Face the Nation” Sunday morning at 10:30 a.m., and again directly before the Super Bowl at 3:30 p.m.

WATCH: @SpeakerPelosi “doesn’t mind human trafficking, or she wouldn’t do this,” accuses President Trump@margbrennan sat down with @realDonaldTrump for an interview airing Sunday on @FaceTheNation https://t.co/WNDyEQ2ta5 pic.twitter.com/Tl3Fk7Ew3p