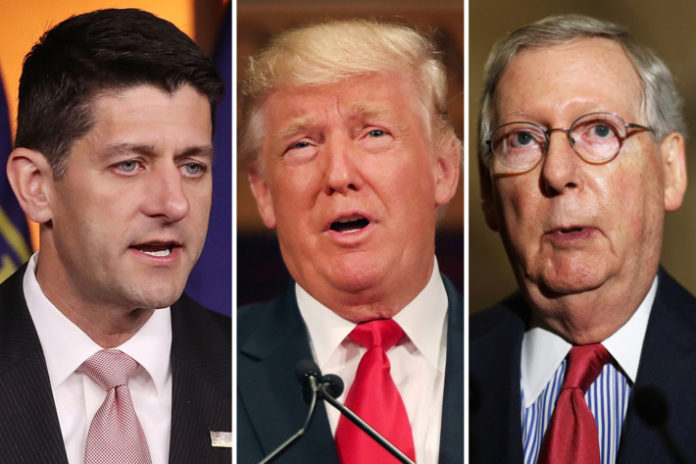 With the midterm election now just two weeks away, President Donald Trump is already planning what excuse he’ll use if and when Democrats retake control of Congress: He plans to blame Speaker of the House Paul Ryan R-WI) and Senate Majority Leader Mitch McConnell (R-KY).

“According to two people familiar with the conversations, Trump is distancing himself from a potential Republican thumping on Election Day. He’s telling confidants that he doesn’t see the midterms as a referendum on himself, describing his 2020 reelection bid as ‘the real election.’ And he says that he holds House Speaker Paul Ryan and Senate Majority Leader Mitch McConnell responsible for protecting their congressional majorities.

According to one person with knowledge of these talks, Trump has said of Ryan and McConnell: ‘These are their elections … and if they screw it up, it’s not my fault.'”

As we’ve learned over the years, nothing is ever Donald Trump’s fault. He is utterly incapable of accepting blame for his words or actions, repeatedly trying to push responsibility onto others in order to shield his own fragile ego and carefully crafted public image from any criticism.

In recent weeks, Trump has also tried to assure his voters that midterm losses won’t be nearly as bad as expected, but he has also suggested that a vote for a Republican candidate is in actuality a ballot cast for him, telling a crowd in Missouri last month:

But if the projected blue wave of Democratic voters does deliver a stinging rebuke to the president, he’ll suggested 2018 had nothing to do with him at all:

“Look for the White House to say something like, ‘Paul Ryan chose to be a lame duck speaker instead of leaving, which cost Congress the chance to do several things before November,’ said an aide to one GOP member who speaks with the president often.”

Another GOP aide noted that while Trump may try to blame others, his own actions and rhetoric are what have energized Democrats, so his attempts to lay the blame on others may be doomed to failure:

“The president’s rhetoric is what’s actually energized the left, so it would be hard to put it on Congress if we lost the House. But it’s just classic behavior on the part of this president to not shoulder the blame if things go bad, and to definitely take responsibility if things go right.”

What else would you expect from a malignant narcissist?