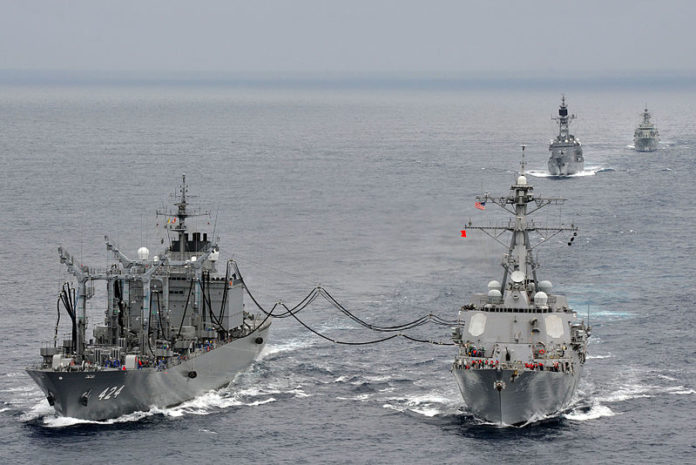 For months, President Donald Trump has been ratcheting up his trade war with China, but his economic war could become a real war after a United States naval destroyer sailed into the disputed South China Sea.

Earlier this month, Trump claimed that negotiations with China are “doing well,” and has repeatedly argued that a trade war had to be done to challenge Beijing’s unfair exchange rate policy that has created a trade imbalance between our two nations.

The United States Treasury has taken in MANY billions of dollars from the Tariffs we are charging China and other countries that have not treated us fairly. In the meantime we are doing well in various Trade Negotiations currently going on. At some point this had to be done!

Regardless of whether tariffs are the correct path toward fixing our trade problems with China, Trump only harmed his trade talks with the second largest economy on the planet after the USS McCampbell wondered into the South China Sea, which China claims as its territory, in order “to challenge excessive maritime claims” and promote “freedom of navigation.”

China is not the only nation that has a claim on the South China Sea. Several other nations in Southeast Asia, including Vietnam and the Philippines, also have claims. China has been building artificial islands to use as military emplacements to intimidate other nations.

But a United Nations tribunal has already ruled against China because most of the South China Sea falls outside the 200 nautical mile exclusive economic zone along the Chinese coast.

However, while American ships have the right to sail that sea up to a point without fear of harassment, the timing could not have been worse.

According to a Reuters report:

“We urge the United States to immediately cease this kind of provocation,” he said, adding that China had sent military ships and aircraft to identify and warn off the ship.

China’s defense ministry added that the ship had “gravely infringed upon China’s sovereignty”.

“We will be on high alert and will closely monitor the air and sea situation to strongly defend our sovereignty and security,” it said in comments carried by state media.

And that not only raises military tensions between the United States and China, but it also undermines the trade talks and gives China an excuse to withdraw from them.

When asked if the “provocation” will affect the talks, Lu said that “both sides have the responsibility to create the necessary positive atmosphere for this.”

In other words, Trump just created a negative atmosphere for trade talks in an effort to make a statement in the South China Sea.

This trade war has already cost the United States economy dearly, especially farmers and manufacturers in red states. The last thing we need is a military conflict with China.

Now is not the time to escalate tensions. but that’s apparently what Trump intends to do.