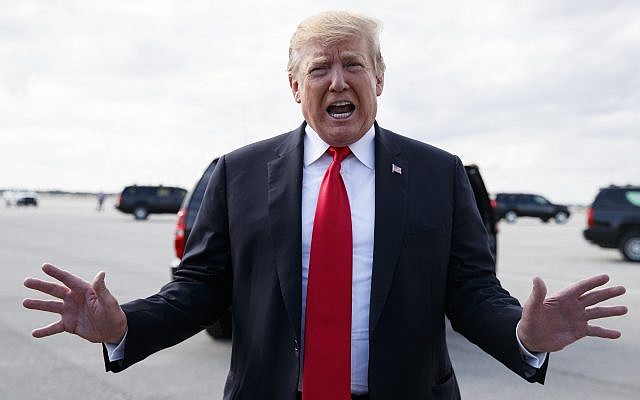 President Donald Trump attacked the Washington Post on Friday for calling out his lies about Mexico’s immigration system. And then he repeated threats he made against Mexico on Thursday that would harm the American auto industry.

On Thursday, Trump caved on his threat to close the border but threatened to slap Mexico with tariffs for allegedly being weak on immigration.

The tariffs would hurt the American auto industry, which would come to a screeching halt and put thousands of jobs at risk just so Trump can pretend he’s being tough on Mexico over a problem that doesn’t actually exist.

Trump soon followed up by claiming that Mexico caved to his demands and is now starting to detain and deport Central American migrants.

But the Washington Post fact-checked him on Friday morning.

“Trump says Mexico began to detain thousands of Central American migrants at its southern border only this week,” WaPo wrote. “Let’s not beat around the bush here — that’s totally false. They’ve been doing it for decades.”

“The president also claims Mexico has the strongest immigration laws in the world,” the newspaper continued. “Experts sharply disagree. Mexico does have penalties for immigration violations, but it decriminalized the act of crossing the border in 2011. Contrast that with the United States — where unauthorized entry is a misdemeanor for first-time offenders and a felony for repeat offenders — and Trump’s claim falls apart.”

Focusing on Trump’s claims about Mexico only now beginning to detain migrants, WaPo demonstrated that Trump is lying.

The claim that Mexico only this week started to detain thousands of Central Americans at its southern border is nonsense. Mexican immigration officials had 886,640 encounters with Guatemalans, Hondurans and Salvadorans from 2011 through February, according to data from Mexico’s Department of the Interior (SEGOB).

“It’s not surprising to see Trump trample over basic facts about immigration in Mexico,” WaPo concluded, giving Trump four Pinocchios. “After all, the president routinely makes unfounded claims about the U.S. immigration system. The Mexican government says it’s tightening security in a key area 200 miles from its southern border, but Trump makes a far different and demonstrably false claim: that Mexico began detaining Central Americans by the thousands only days ago. Mexico has deported Guatemalans, Hondurans, and Salvadorans more than 2 million times since 2001.”

Well, Trump didn’t like being called out for lying, and insisted in a rage on Twitter that Mexico is only now starting to detain and deport migrants, and all because of his threats, which he went on to repeat.

The Crazed and Dishonest Washington Post again purposely got it wrong. Mexico, for the first time in decades, is meaningfully apprehending illegals at THEIR Southern Border, before the long march up to the U.S. This is great and the way it should be. The big flow will stop…….

….However, if for any reason Mexico stops apprehending and bringing the illegals back to where they came from, the U.S. will be forced to Tariff at 25% all cars made in Mexico and shipped over the Border to us. If that doesn’t work, which it will, I will close the Border…….

….This will supersede USMCA. Likewise I am looking at an economic penalty for the 500 Billion Dollars in illegal DRUGS that are shipped and smuggled through Mexico and across our Southern Border. Over 100,00 Americans die each year, sooo many families destroyed!

Heading to the Southern Border to show a section of the new Wall being built! Leaving now!

This is yet another example of Trump pretending there is a problem, whining about that problem and then threatening punishment if that problem isn’t fixed, only to then declare that he solved the imaginary problem.

In reality, the only problem is that the United States created real problems in Central America that are causing thousands to flee their homeland in search of asylum. Trump is ignoring the humanitarian crisis at the border in favor of fake crises so he can pander to his racist base of supporters.

Now those same supporters foolishly believe Trump is a hero who forced Mexico to do something they have already been doing for decades.