The United States Blues
Home Elections Trump Rages At Media For Not Calling 2018 Election A Victory For... 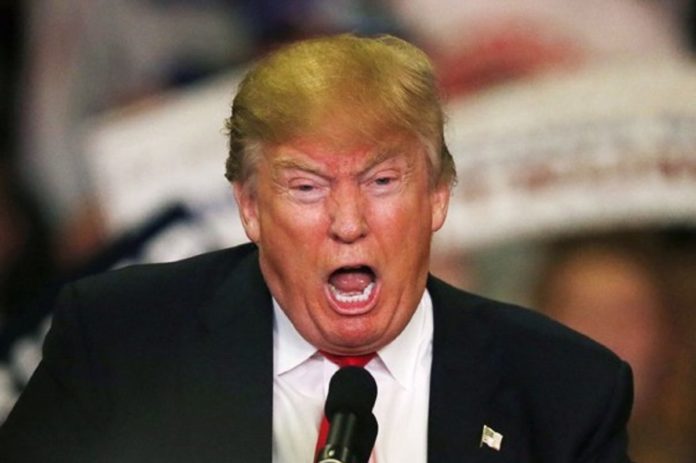 President Donald Trump lashed out at the press on Thursday evening for not characterizing the 2018 election as a Republican victory and for not giving him credit for it. Because math is hard for him, apparently.

Democrats resoundingly flipped the House last month in an election that saw many Republican incumbents lose their seats, even in red districts such as in Texas and California, where Republicans lost every single Orange County district that they had traditionally held since the Reagan years.

But Trump thinks that Republicans somehow won the election and that only the Senate matters and he threw a temper tantrum because the media isn’t reporting on the election his way.

Does the Fake News Media ever mention the fact that Republicans, with the very important help of my campaign Rallies, WON THE UNITED STATES SENATE, 53 to 47? All I hear is that the Open Border Dems won the House. Senate alone approves judges & others. Big Republican Win!

Again, Democrats won the House, which means Trump’s legislative agenda just stalled out and real investigations of his administration can begin. That’s not a win for him. It’s also clear that if Democrats field a great candidate in 2020, Trump could be a one-term president. And since Republicans will face harder Senate races that year as well, it’s possible Democrats will take the Senate back and hold both houses of Congress and the White House starting in 2021.

In no way was the 2018 Election a win for Trump and Republicans, but rather a harbinger of things to come.

Funny. You won two Senate seats, and lost 40 House seats despite outrageous Republican gerrymandering, and you think that’s winning. The country doesn’t like what you’re doing.

You lost the House. You retained the Senate.

You didn’t win 53-47 because most seats were not up for reelection.

You can only reliably win contests in the reddest of states.

Your party is in shambles.

Probably because the Dems gained more than 40 seats in the House while the Republicans gained just two in the Senate but who’s counting.

Ok Donut, these are the facts, ok. You already had the Senate, so you didn’t win anything, you held serve. Additionally, there were so many more D Senators at risk during these Midterms than R’s. Your Party should have actually picked up at least 3 more than you did. SAD!

You didn’t win the Senate, you kept it. Not nearly as significant. #TickTockMFer

Ok, listen to me. You won 2 more seats and we lost 2. The Dems were NEVER projected to take the Senate and they actually expected to lose more. So, you got 2 and we flipped the House. There is nobody on this green earth that sees the midterms as a victory for you. ZERO.

Um, Republicans controlled the Senate before the midterms, so technically, no they didn’t win it. They retained control.

The news is that the Democrats won control of the House. And with it, some significant checks against a crooked POTUS, including subpoena power, impeachment.

Republicans would be wise to understand that they got beat by Democrats in the 2018 election and that the reason they got beat is because of Trump. His behavior and terrible policies are energizing Democratic voters and causing independent and moderate Republican voters to lean Democratic. That’s not good for their political survival, and their election prospects will only get worse if they join Trump in denial.