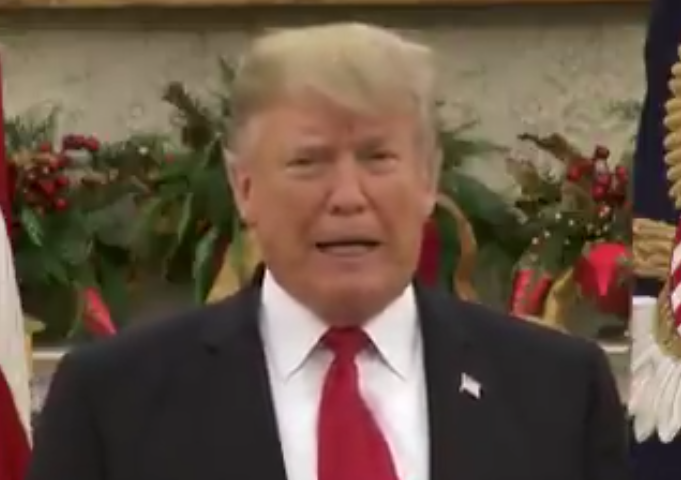 As a government shutdown loomed on Friday night, President Donald Trump resorted to fear mongering about MS-13 gang members in one last desperate pitch to Congress for his border wall.

As the deadline approached to avert a government shutdown, Trump took to Twitter to pathetically plead his case for spending $5 billion on his vanity project.

“Our great country must have border security,” Trump said. “We don’t want people coming in who aren’t supposed to be here.”

However, according to this tweet just a couple days ago, we already have tight border security without his wall:

“It’s very dangerous out there,” Trump continued. “Drugs are pouring in. Human trafficking. So many different problems, including gangs like MS-13. We don’t want them in the United States.”

It turns out that Trump’s claims have been fact-checked previously by the Associated Press.

“It’s inaccurate for Trump and his administration to assert that weak immigration enforcement is leading to “unchecked” crime, including from the ‘vile gang MS-13.’ Nor is there evidence of a ‘surge’ in MS-13.

“Trump suggests that weak border enforcement is contributing to crime committed by MS-13. But the gang actually has many U.S.-born members at this point — people who by virtue of U.S. citizenship can’t be denied entry based on their nationality, or deported. The government has not said recently how many members it thinks are citizens and immigrants. In notable raids on MS-13 in 2015 and 2016, most of the people caught were found to be U.S. citizens.

“More broadly, Trump overgeneralizes about people who arrive illegally in the U.S. Several studies have shown that immigration does not lead to increased crime.”

Trump then bragged about the continuing resolution passed by House Republicans and spouted the vote count as if that’s supposed to impress us. He also proceeded to blame Senate Democrats and claim that there’s nothing Republicans can do to stop the impending government shutdown.

OUR GREAT COUNTRY MUST HAVE BORDER SECURITY! pic.twitter.com/ZGcYygMf3a

Except Trump and Republicans had a chance to prevent the shutdown on Thursday after the Senate overwhelmingly passed a bipartisan spending measure to fund the government through early February. Trump rejected that bill because he didn’t get wall funding, and now many members of Congress have left for the holidays.

Furthermore, it’s too late for Trump to blame the Democrats after he so clearly and decidedly claimed that he owns this shutdown during an Oval Office meeting last week that just so happens to be on video.

Trump knows he is on the hook for this shutdown, but he doesn’t want to take responsibility for it. Instead, he would rather blame Democrats and fear monger by lying. America does not need a border wall. We already have a border fence that border funding maintains, not to mention border patrol agents and new technology. The fact is that Trump wants a monument to himself and Congress isn’t giving it to him so he’s throwing a temper tantrum. He is literally about to preside over the third government shutdown on his watch in the last two years, and all with a Republican controlled Congress.

But they don’t appear to have the balls to stand up to him as usual, which is why they lost big on Election Day last month and won’t control the House anymore when the new session begins in January.