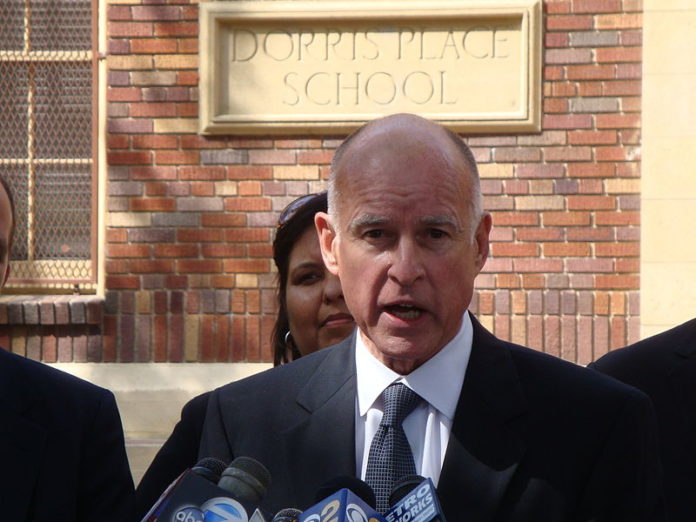 In yet another Twitter tantrum contradicting his own administration, President Donald Trump on Thursday claimed that the federal government would refuse to pay for Governor Jerry Brown’s deployment of National Guard troops in California.

On Wednesday, after negotiations between California and the Department of Homeland Security, Brown announced that he would deploy 400 troops to “fight transnational crime” rather than send them to the border to enforce Trump’s immigration agenda. The troops will not:

And Homeland Security agreed to these terms and agreed to pay for the deployment.

Just spoke w @JerryBrownGov about deploying the @USNationalGuard in California. Final details are being worked out but we are looking forward to the support. Thank you Gov Brown!

But, leave it to Trump to undermine the work done by his own administration because he isn’t getting his own way. Because that’s exactly what he did on Thursday morning.

First, he thanked San Diego County for supporting his lawsuit against the state.

Thank you San Diego County for defending the rule of law and supporting our lawsuit against California’s illegal and unconstitutional ‘Sanctuary’ policies. California’s dangerous policies release violent criminals back into our communities, putting all Americans at risk.

And then he lashed out at Brown and reneged on the deal his own Homeland Security officials made with California.

Governor Jerry Brown announced he will deploy “up to 400 National Guard Troops” to do nothing. The crime rate in California is high enough, and the Federal Government will not be paying for Governor Brown’s charade. We need border security and action, not words!

If Trump really cares about “crime” in California, he should applaud Brown’s effort to fight transnational crime. And he should honor the deal made with Homeland Security, which provides federal funding for the operations conducted by the California National Guard under Title 32, which Trump cited in his request to states for National Guard support.

These troops are being used to deal with the alleged crime that Trump is complaining about as justification for his useless and expensive border wall. He would be well-advised to take what he can get and shut the hell up.

But, Trump doesn’t really care about stopping crime. He’d rather whine because he isn’t getting his way, so he is trying to bully Brown and California.

It’s irresponsible and demonstrates how chaotic Trump’s administration is and how much he really cares about dealing with drug cartels and violent criminal organizations.