The United States Blues
Home News Trump refuses to back off ‘Dems hate Jews’ view according to Sarah... 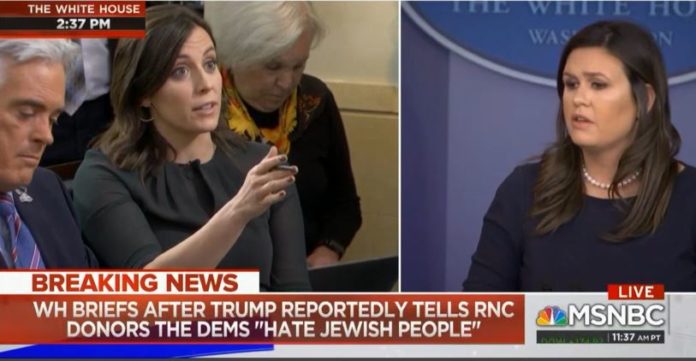 Over the weekend, Donald Trump was reported to have said to a crowd of donors at his Florida Country Club that “Democrats hate Jewish people.” Today, in her 1st press briefing in 42 days (in which she also claimed this White House is the “most accessible ever”) — Sarah Huckabee Sanders outright refused to answer NBC correspondent Hallie Jackson and at least two other reporters when asked if the boss she speaks for really believed that.

No denial, no backing off — none of it.

Instead, Sanders tried to awkwardly “flip” the narrative and say she should “ask Democrats” if they hate Jews — something akin to asking someone “so, when did you stop beating your wife?” in the context Sanders tried to sell it.

Apparently, the White House is trying to claim the mantle of being the party of Jewish Americans, despite the fact that the president said there were “very fine people” among neo-Nazis and white supremacists who marched in Charlottesville, Virginia, chanting “Jews will not replace us” and that many of Trump’s most ardent supporters are known to traffic in anti-Semitic language as they warn of “global financiers” who threaten American sovereignty.

All of Trump’s bluster seems to be a classic case of psychological projection, i.e. accusing others of that which you know you harbor deep inside your own heart.

Trump loves to say that he cannot possibly be anti-Semitic because his son-in-law is Jewish, but keep in mind this is the same man who says he loves black people but refused to rent apartments to them based on the color of their skin.

If Trump continues to suggest that his political opponents are opposed to Jewish Americans, the only thing he’ll accomplish is proving his own political desperation and driving voters away from him in droves.