The United States Blues
Home News Trump Rejects Bipartisan Immigration Bill That Gives Him Most Of What He... 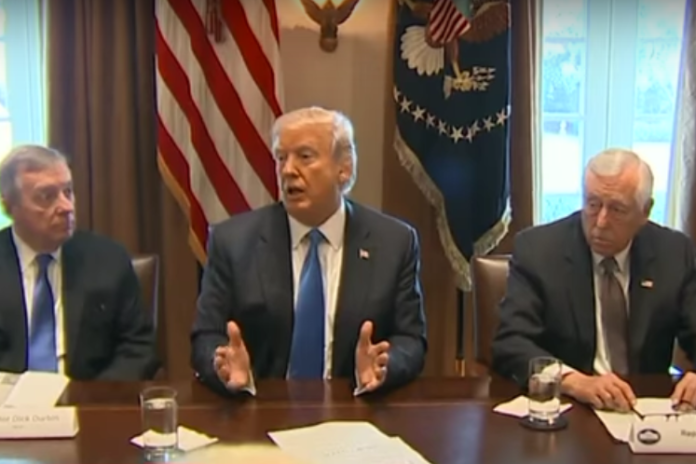 President Donald Trump once again proved that the only immigration compromise he is interested in is no compromise at all.

Led by Senator Angus King (I-Maine) and Senator Mike Rounds (R-S.D.), a team of eight Democrats and eight Republicans have agreed on a piece of bipartisan immigration legislation that would grant a pathway to citizenship for over a million DACA recipients while giving Trump the $25 million he wants for his border wall.

The plan also includes limited changes to our immigration system that would reduce the number of legal immigrants only tens of thousands, far less than Trump wanted.

So, Trump gets most of what he wanted, but he still rejected it on Wednesday in a statement released by the White House threatening to veto it.

“The Administration strongly opposes passage of the Schumer-Rounds-Collins Amendment. This Amendment would drastically change our national immigration policy for the worse by weakening border security and undercutting existing immigration law.

Specifically, preventing enforcement with respect to people who entered our country illegally before a date that is in the future would produce a flood of new illegal immigration in the coming months. The Amendment would undermine the safety and security of American families and impede economic growth for American workers.”

The statement also outlined what Trump is calling a four-pillar plan, which includes “securing the border through building the physical border wall and closing legal loopholes, protecting the nuclear family by limiting sponsorships to spouses and children, canceling the visa lottery, and implementing a lasting solution on DACA.”

Back in January, Trump told a group senators and representative that he would be willing to sign a bipartisan deal without whining about it if Republicans and Democrats can get one done.

As usual, it turns out Trump lied.

Not only did he reject this latest bipartisan effort, but he also rejected a bipartisan proposal only days after his January remarks in a smaller meeting in which he referred to Haiti and African nations as “sh*thole countries.”

“Republicans want to fix DACA more than the Democrats do.”

Republicans want to fix DACA far more than the Democrats do. The Dems had all three branches of government back in 2008-2011, and they decided not to do anything about DACA. They only want to use it as a campaign issue. Vote Republican!

Trump even praised both parties for trying to make a deal.

Negotiations on DACA have begun. Republicans want to make a deal and Democrats say they want to make a deal. Wouldn’t it be great if we could finally, after so many years, solve the DACA puzzle. This will be our last chance, there will never be another opportunity! March 5th.

But, in the end, Trump rejected the bipartisan deal despite getting most of what he wanted. And he threw another wrench in the negotiations on Thursday morning by suggesting something else he wants in the deal.

While the Republicans and Democrats in Congress are working hard to come up with a solution to DACA, they should be strongly considering a system of Merit Based Immigration so that we will have the people ready, willing and able to help all of those companies moving into the USA!

Donald Trump is totally incapable of governing. Even when he gets most of what he wants, he can’t accept it because he didn’t get absolutely everything. If anyone gets screwed by this deal, it’s DACA recipients and Democrats because the bill only covers just over a million DREAMers while basically giving Trump all the wall funding he demanded, thus publicly caving on their previous refusals to fund the wall.

Clearly, Trump doesn’t want a compromise bill. He wants a bill that gives him everything he wants while Democrats get nothing. And that’s not how compromise works.

Democrats should never have agreed to pass a budget without saving DACA first. Now they are backed into a corner that forces them to either protect a few DACA recipients or none at all.

They got burned by Trump, and they should be ashamed of themselves for it.

The point is, however, that Trump can’t be trusted and he doesn’t really care about making deals. He wants his way or no way at all. And that’s not how our democracy works. It’s how a dictatorship works.