The United States Blues
Home News Trump Retweets Meme Calling For Mueller And Rosenstein To Be Tried For... 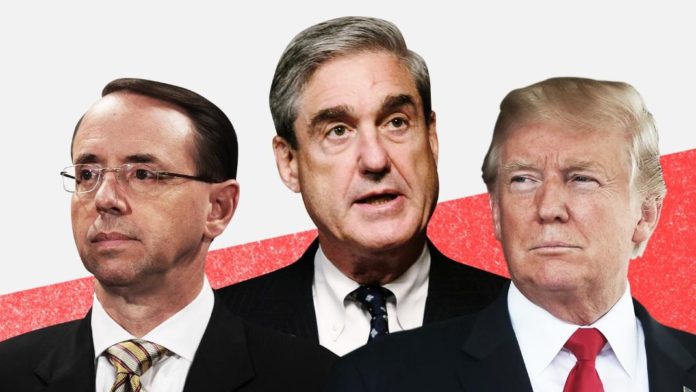 If perhaps you were wondering just how obsessed President Donald Trump is with the investigation being conducted by Special Counsel Robert Mueller into the Russian attack on our 2016 election, you don’t have to look any further than the president’s Twitter feed, where he retweeted this meme:

Be sure and note that every person in that meme has criticized Trump or is involved in the Russia probe. But the most telling images are of Deputy Attorney General Rod Rosenstein, who oversees Mueller and the special counsel himself.

Though it’s been said many times before, this bears repeating: An innocent person doesn’t act this way.

The retweet comes just hours after Trump had posted this:

While the disgusting Fake News is doing everything within their power not to report it that way, at least 3 major players are intimating that the Angry Mueller Gang of Dems is viciously telling witnesses to lie about facts & they will get relief. This is our Joseph McCarthy Era!

Clearly, Trump is worried, and other Twitter users were only too happy to remind Donnie that his comments reek of desperation:

I saw this Tweet on another site and thought…nah…it has to be a joke? There’s no way the POTUS would send this out on his official Twitter account. But, alas, it is real. I don’t know why I’m surprised or saddened by anything you say or do anymore.

Ahhhh..the old projection routine. It’s become predictable and you are going down.

The whole world knows you’re scared Trump. You must be the worst poker player in history 😂😂. You’re going down Trump, you and your whole corrupt family