The United States Blues
Home News Trump retweets video of wild leopards and gets reminded that his sons... 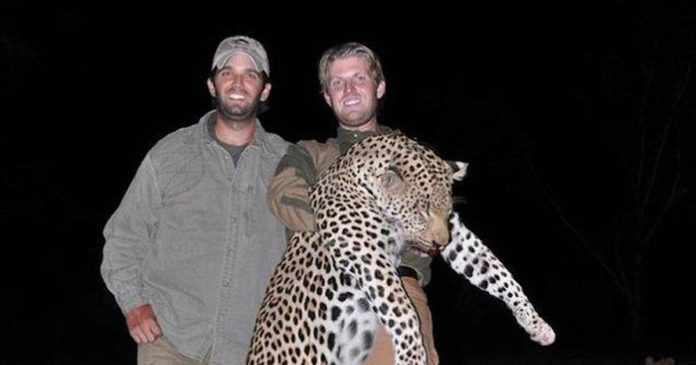 Something strange is going on with President Donald Trump’s Twitter account, and it’s more than just the usual madness he posts on social media.

Tuesday evening, Trump retweeted a video of two wild leopards which had originally been posted by @planetepics, who shared the video from wildlife conservationist Lisa Tora Jaqueline Kytösaho:

Granted, the big cats are indeed “beautiful and magnificent,” but social media users were quick to remind the president that his two oldest sons are known for shooting such animals while on safari:

He knows his son kills these animals right? pic.twitter.com/X3B0gcLV7K

Trump retweets gorgeous big cats that both of his sons enjoy killing?!
SMFH

I think one is a jaguar & the other is a black panther – they are beautiful & should be preserved. https://t.co/D75PiGwLws

Others on Twitter wondered if there was a deeper message behind the retweet of the video:

What am I missing? Is this a metaphor for something pic.twitter.com/SmCkDdh0yK

Trump’s way of saying he’s a cat guy and not a dog guy and putting the dog debate to bed for good? https://t.co/uBzlIoqb5t

…does this mean we’re now at war? Is this a new law? What happens now? pic.twitter.com/wJ6ORMXGS9

This is the one retweet by Donald J. Trump that I totally and completely agree with. Never thought I’d see the day. Wow.

But then I remember that his sons kill these magnificent animals for sport.

If the president happens to retweet a video of an elephant later today, is that an official 2020 re-election announcement?