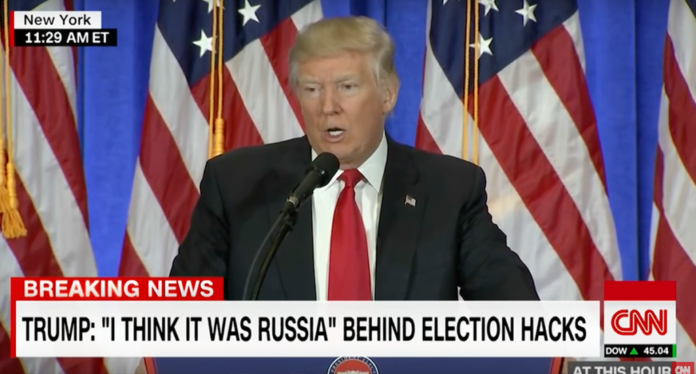 This story will no doubt make you do a double-take. On Wednesday, following more testimony from President Donald Trump’s hand-selected intelligence chiefs that Russia interfered in the 2016 presidential election, noting that they think Russia will do so again in 2018, Trump doubled and tripled down on the notion that the Russians haven’t done anything.

He is apparently conflating the issues of Russian interference and the investigation into Russian collusion with the Trump campaign.

I had to double-check the date on this story. https://t.co/LDM5sBnTn1

Director of National Intelligence Dan Coats, CIA Director Mike Pompeo and FBI Director Chris Wray all spoke before a Senate panel on worldwide threats on Tuesday and unanimously agreed with the intelligence community’s prior assessment on the matter.

It’s common knowledge, like climate change, only with full support from Trump’s own people.

” […] Three sources familiar with the President’s thinking say he remains unconvinced that Russia interfered in the presidential election.”

Contrast that with this perfectly clear statement from Dan Coats:

“There should be no doubt that Russia perceives its past efforts as successful and views the 2018 US midterm elections as a potential target for Russian influence operations.”

Part of the reason why Trump won’t own up to the well-established conclusion: He wants to believe, or wants his followers to believe that he won the election all on his own without outside help, which would make his election less legitimate. He has also tried to shrug off the matter by saying “other people and other countries” likely interfered in the election besides Russia.

“As far as hacking, I think it was Russia. But I think we also get hacked by other countries and other people,” said Trump at a June 2017 press conference.

Trump blamed the Democratic National Committee for being vulnerable to hacking, but not Russia.

“The Democratic National Committee was totally open to be hacked,” said Trump.

At the time, Trump said he was going to put the “six top people in the world” in a room together to “form a defense.” Instead, almost a year later, Trump has done nothing to protect America from further interference. Instead, Secretary of State Rex Tillerson has made it perfectly clear America will be targeted by the Russians again, and likely already is experiencing interference, but he had no clear recommendations on what to do about it. Tillerson said:

“I think it’s important we just continue to say to Russia, ‘Look, you think we don’t see what you’re doing. We do see it, and you need to stop. If you don’t, you’re going to just continue to invite consequences for yourself.'”

It appears the intelligence community may be taking actions but on their own.

When asked by Senator Jack Reed (D-R.I.) if the intelligence community’s efforts to counter the Russian’s ongoing election meddling was directed by Trump, FBI Director Chris Wray made it perfectly clear that Trump had remained unmoving on the issue.

If they are taking action to counter the Russians, Wray said its:

“Not specifically directed by the President.”

See Trump acknowledge Russian interference in the video below. Now ask yourself, “Do you really think we buy your feigned ignorance, Trump?” This is absolutely a threat to America’s national security. It’s time Trump owned up to reality.