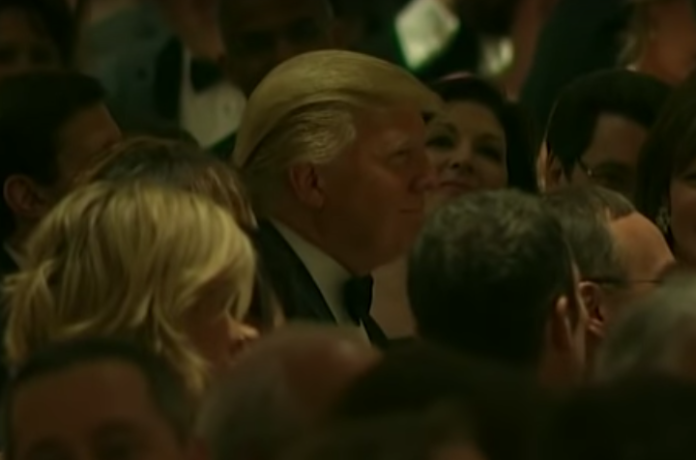 President Donald Trump’s skin is so thin that he can’t handle being the butt of a joke, but he made a punchline of himself Tuesday night by suggesting he will attend the White House Correspondents’ Dinner since there won’t be a comedian there to make fun of him.

For the last two years, Trump has skipped the event in favor of a glorified ego rally that’s all about him because he’s scared to death of the comedians the White House Correspondents’ Association (WHCA) usually recruit to host it.

That’s because it’s a tradition that government officials and media personalities get roasted, including the president. Even former President Barack Obama endured jokes at his expense, only he had no problem dishing it out as much as he took. For example, Obama humiliated Trump in 2011 in a strong demonstration of his comedic chops.

Trump has no such skills and he’s too much of a snowflake to take a joke, which is why he refuses to attend.

But now that the WHCA has chosen a non-comedian to host next year’s event, Trump is considering showing up, and he couldn’t stop himself from taking cheap shots at comedian Michelle Wolf, who hosted the event and roasted White House officials during the event earlier this year.

So-called comedian Michelle Wolf bombed so badly last year at the White House Correspondents’ Dinner that this year, for the first time in decades, they will have an author instead of a comedian. Good first step in comeback of a dying evening and tradition! Maybe I will go?

Indeed, the WHCD has chosen an author to host this year. The problem for Trump is that it’s historian Ron Chernow, who plans to defend freedom of the press and give Trump a history lesson. Oh, and his biography of Alexander Hamilton inspired the Broadway play Hamilton, which is a powerhouse play that Trump has whined about in the past.

“The White House Correspondents’ Association has asked me to make the case for the First Amendment and I am happy to oblige,” Chernow said in a statement. “Freedom of the press is always a timely subject and this seems like the perfect moment to go back to basics. My major worry these days is that we Americans will forget who we are as a people and historians should serve as our chief custodians in preserving that rich storehouse of memory. While I have never been mistaken for a stand-up comedian, I promise that my history lesson won’t be dry.”

Of course, this means Trump will likely attack the press and make lame attempts at making jokes at their expense without a comedian as a counterbalance, leaving the event as a one-sided affair in which Trump can target the press at will and make the event all about him and his supposed “win” against the media.

That’s ok, we can joke about you to your face right now. For instance-

Do you think when Ivanka’s in prison you’ll get conjugal visits?

I’m so sad to see this. The greatest moment ever at the WHCA was when the comedian with the best timing, Barack Obama, completely destroyed & humiliated you while you seethed in the audience.

You did get revenge though, and became the first potus to be impeached & convicted.

You’ll go now because you aren’t at risk of having to suffer a few gentle jokes at your expense. Your skin is so thin that if the weight of your hair and its toupee glue weren’t holding it down it would blow away in the wind.

For the first time in decades, the current president is too thinned skinned to handle the traditional roasting at the W.H. Correspondents’ Dinner. Meow.

Remember when Obama roasted you at this very same dinner?😂😂

People are dying and missing in California, the stock market has plummeted drastically in the past two weeks destroying all the gains made in 2018, and three heinous shootings have occurred recently. And you’re worried about a dinner?

Ooh, yes please go. The only thing funnier than seeing you roasted by a comedian would be seeing a historian put your presidency in context with all the others. DO IT! I’ll get my popcorn.

To see how a real president handles the WHCD, here’s the video of Obama’s 2011 appearance via YouTube.