The United States Blues
Home News Trump Says He ‘Would Have Been A Good General,’ Then Trashes James... 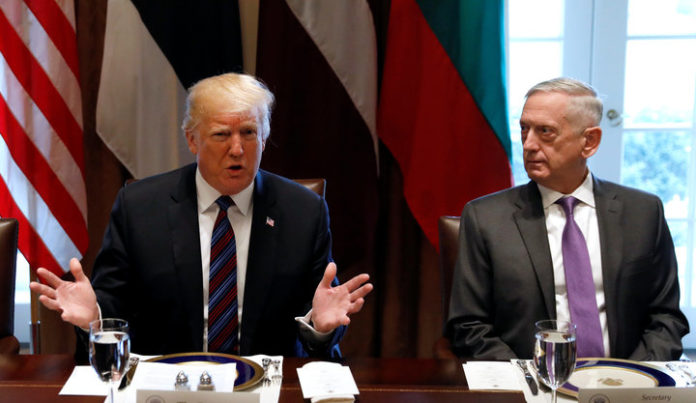 According to President Donald Trump, losing Secretary of Defense James Mattis — a decorated war hero — was no big deal, and Trump is pretty sure he would have been a great general, too, if he had chosen to do so.

During a cabinet meeting Wednesday at the White House, Trump was in rare form, spouting off on topics ranging from the ongoing government shutdown to his still unrealized border wall. But when reporters asked about Mattis’s resignation in December, Trump responded:

“What’s he done for me? How had he done in Afghanistan? Not too good. As you know, president Obama fired him, and essentially so did I.”

Once again we see Trump trying desperately to rewrite history. For the record, Mattis resigned under protest when the president insisted on withdrawing troops precipitously from Syria. Trump has since indicated he will slow down the withdrawal of American forces from the region.

When he had finished slagging Mattis, Trump then proffered a ridiculous notion that he would have probably been a great general:

“I think I would have been a good general, but who knows?”

Ah yes, it’s Trump and his usual delusions of grandeur. He has said he knows more about the military and terrorism than his generals, bragged that he’s smarter than anyone else in the world, and even tried to convince us that he’s a good businessman, even though multiple bankruptcies suggest otherwise.

Shannon Pettypiece of Bloomberg was at the cabinet meeting:

Trump on Mattis at Cabinet meeting:
“What’s he done for me? How had he done in Afghanistan? Not too good”
“As you know, president Obama fired him, and essentially so did I ”
via @ToluseO

Trump adds “I think I would’ve been a good general, but who knows” via @ToluseO https://t.co/ziQmZNEIiZ

Does anyone have a sedative they can give this guy? The more he talks, the more deranged he sounds.