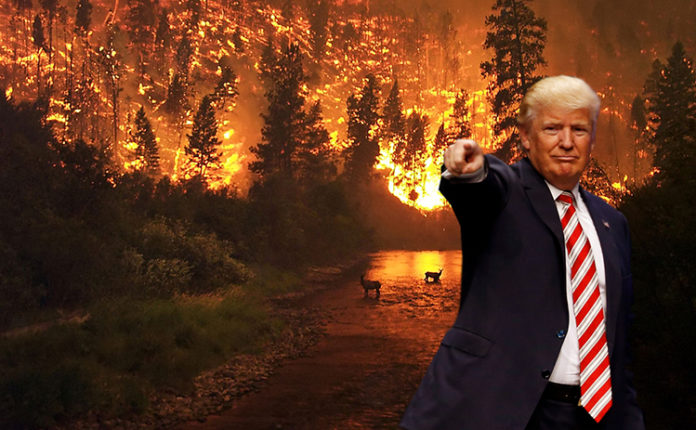 President Donald Trump announced on Twitter Wednesday morning that he is cutting off all FEMA money used to fight wildfires in the state of California, claiming that the money is being wasted by the state:

What remains unclear is whether or not Trump has already ordered the  Federal Emergency Management Agency to cut off funding or is merely threatening to do so, as he has in the past.

Of course, this is the very same President Trump who recommended that Californians rake leaves in their forests in order to prevent future wildfires, saying that Finnish President Sauli Niinistö told him the method had been extremely successful in Finland:

“I was with the president of Finland and he said: ‘We have a much different — we’re a forest nation. He called it a forest nation, and they spent a lot of time on raking and cleaning and doing things. And they don’t have any problem.”

Niinistö, however, denied he had ever said any such thing to Trump.

“Newsom on Tuesday proposed $305 million in spending to accelerate the removal of thousands of acres of dense, dry forests and brush, expand emergency crews and modernize 911 systems in California.

“The funding, which Newsom said will be included in the budget proposal he will submit this week, includes $200 million from a five-year, $1-billion effort state lawmakers approved last year to expand California’s fire prevention efforts.”

No money, however, was allocated for rakes.

Governor Newsom, who accompanied Trump on a tour of the fire-ravaged areas of the state in December, said Tuesday that the federal government needs to do more to help states that face the devastation wrought by such massive wildfires:

“Rather than talking past each other, talking down to each other, maybe we can start partnering and [do] work that needs to be done to address our forest health and forest management. With all due respect, they cut their budget by $2 billion in the last few years … and yet we’re being attacked.”

As usual, Trump is spouting off on an issue he knows little or nothing about. But if he does attempt to cut off FEMA funds to California, there will likely be repercussions from both Congress and the courts. Then again, perhaps all this is merely a distraction to keep us from noticing that the federal government remains shut down thanks to Trump’s childish demand for a border wall.