The United States Blues
Home National News Trump Says His Approval Rating Would Be ‘75%’ If Not For ‘Harassment’... 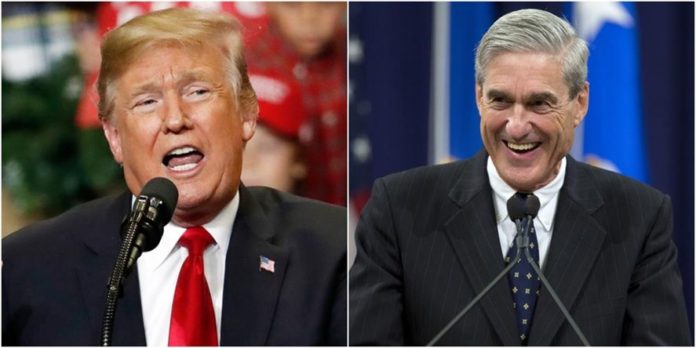 After managing to not embarrass himself or the country too much while attending the funeral of former President George H.W. Bush on Wednesday, President Donald Trump was back to his old ways of tweeting out nonsense Thursday morning, and the object of his ire was Special Counsel Robert Mueller.

Trump couldn’t resist bragging that a new poll from the notoriously unreliable Rasmussen polling firm has his approval rating at 50 percent. This is the very same Rasmussen that confidently predicted Republicans would be victorious on the midterm elections:

And then his attack on Mueller began:

Without the phony Russia Witch Hunt, and with all that we have accomplished in the last almost two years (Tax & Regulation Cuts, Judge’s, Military, Vets, etc.) my approval rating would be at 75% rather than the 50% just reported by Rasmussen. It’s called Presidential Harassment!

Not a word of truth to that second tweet, especially when you consider that Rasmussen in the only poll showing Trump anywhere near the 50 percent mark. The latest RealClearPolitics average of eight polls (including Rasmussen) shows Trump at 43.3 percent approval with 52.5 percent saying they disapprove of the job the president is doing.

Rather than bolstering his case of how much Americans supposedly love him, Trump’s latest tweets only serve to reinforce the notion that he’s terrified of what comes next from the special counsel. On Friday, a new court filing from the Mueller team will detail exactly what laws former campaign chairman Paul Manafort broke when he violated his plea agreement. That document could also point to illegal actions by Trump and his 2016 campaign staff.

For now, the best thing about Trump’s delusional Thursday tweet is the response he got from social media:

2. Your tax scam only made the rich richer, and now you want to steal our Benefits to pay for it.

4. Your approval rating is 39%. Not because of Mueller. It’s because you’re an ASSHOLE.

You LOST the popular vote. You will never ever never EVER get above 50%. The people who voted against you despise you more now than we did Nov 8th 2016.

I also suspect your approval rating would be higher if you threw away your phone.

When 3 million more voters cast their vote for your opponent and you act so un-presidential, how could you ever expect to have a 75% approval rating? Obviously, there’s more to being a POTUS than what your constituents have been witnessing for the last 2 years.