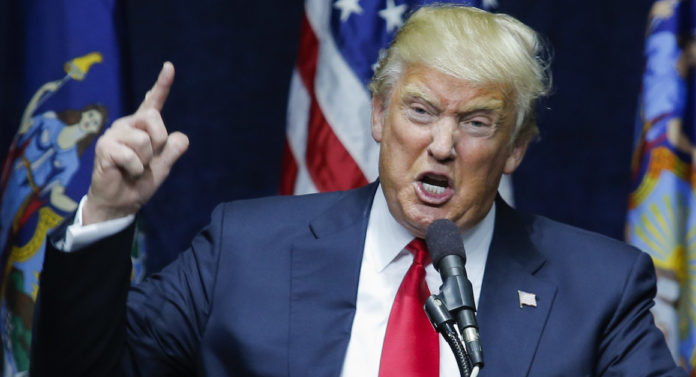 President Donald Trump had one of his pillow talk sessions with Sean Hannity on Thursday night when he called into the Fox News show to scream “treason” in response to former Special Counsel Robert Mueller’s damning testimony on his report.

Mueller made it clear during congressional hearings on Wednesday that his report did NOT exonerate Trump from any wrongdoing and that he did find evidence that Trump’s campaign coordinated with Russia in 2016 to interfere with the election.

Trump had already thrown a massive temper tantrum on Twitter that same day by attacking Mueller. On Thursday night, he took the attacks even further by accusing Mueller of treason for investigating him.

TRUMP on the Russia investigation: “This is an absolute catastrophe for our country … this was treason, this was high crimes, this was everything — as bad a definition as you want to come up with. This should never be allowed to happen to our country again. pic.twitter.com/x1dAJMF8sP

Trump would then go on to claim that the Russia investigation was a “scam” and a “coup attempt.”

TRUMP on the Russia investigation: “This was a coup attempt … we have some very great people, but we also have some very bad people. And I think we caught them.” pic.twitter.com/KwguCflCQe

By accusing Mueller of treason, he is calling for his execution — since the punishment for treason is death. But there was nothing treasonous about the Russia investigation. The FBI informed Republicans in Congress that such an investigation was being undertaken because our democracy had been attacked and is still under attack today. None of them objected. Mueller’s job was to investigate Russian interference and whether or not Trump’s campaign conspired with the Russians to help Trump win. He could not establish the crime of conspiracy, but Trump committed ten instances of obstruction of justice in his effort to discredit or undermine the probe, thus making things worse for himself. Had he not obstructed the probe, the report would have been far less damaging to him.

And he’s only making things worse for himself now by crying treason. Because Mueller only did his job by investigating. Trump is the one who betrayed his country by letting the Russians meddle on his behalf.