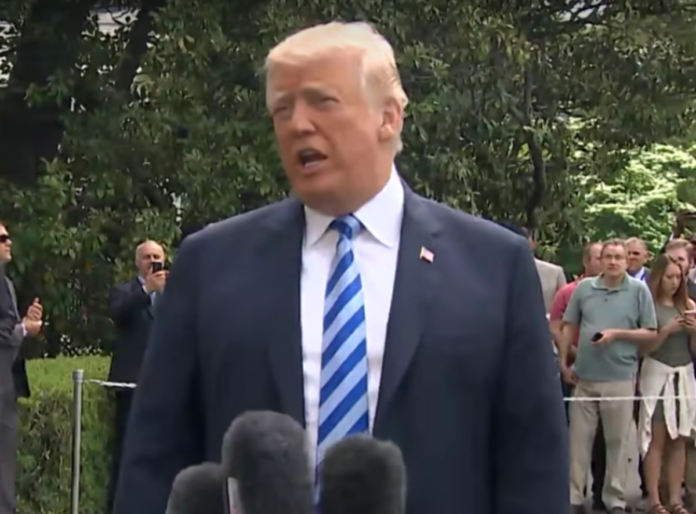 Trump said on Friday in remarks outside the White House that:

“He just started yesterday. He’ll get his facts straight.”

Mr. Cohen, an attorney, received a monthly retainer, not from the campaign and having nothing to do with the campaign, from which he entered into, through reimbursement, a private contract between two parties, known as a non-disclosure agreement, or NDA. These agreements are…..

…very common among celebrities and people of wealth. In this case it is in full force and effect and will be used in Arbitration for damages against Ms. Clifford (Daniels). The agreement was used to stop the false and extortionist accusations made by her about an affair,……

…despite already having signed a detailed letter admitting that there was no affair. Prior to its violation by Ms. Clifford and her attorney, this was a private agreement. Money from the campaign, or campaign contributions, played no roll in this transaction.

Giuliani had previously stated that the payment was made to Daniels to prevent her from talking about her affair with Trump during the final stretch of the 2016 campaign. Giuliani also revealed that Trump actually knew about the payment all along despite repeatedly claiming that he knew nothing about it.

Giuliani’s remarks opened Trump up to even more legal trouble, so it’s no wonder why Trump threw him under the bus on Friday.

“I’ll tell you this, when Rudy made the statements ― he’s great ― but Rudy had just started and he wasn’t totally familiar with everything. And Rudy ― we love Rudy ― he’s a special guy. What he really understands is this is a witch hunt. But when he made certain statements, he just started yesterday. So that’s it. It’s actually very simple. I say, you know what, learn before you speak. It’s a lot easier.”

Giuliani clearly received Trump’s message because he would make a statement later in the day clarifying his remarks, which, in this case, means agreeing with Trump.

One thing is for certain, Trump humiliated Giuliani today, and it’s exactly why many high profile attorneys and law firms have declined to represent Trump in recent months. Trump can’t keep his mouth shut, and he tends to screw people over. Just ask Michael Cohen. Now Giuliani is learning that the hard way.