The United States Blues
Home News Trump Stirs Up Bullsh*t About Pelosi On Twitter Instead Of Focusing On... 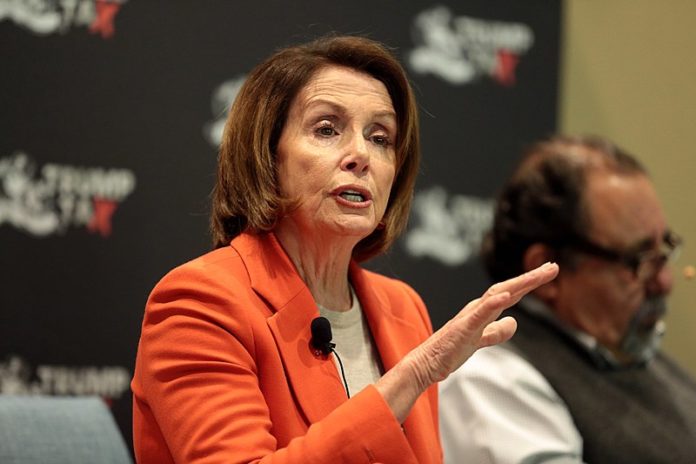 California is burning as the deadliest wildfires in state history continue to rage, killing over 60 people so far; a thousand more are missing. But instead of focusing on the tragedy and his impending visit, President Donald Trump tweeted about House Minority Leader Nancy Pelosi (D-Calif.).

Trump is already heavily criticized for being divisive, and his attacks on California as wildfires tragically swept across the state have outraged Americans across the nation. He not only blamed California for the fires that were fueled by climate change, he threatened to withhold federal funding from the state over his notion that lack of forest management is the reason why the wildfires are so bad.

Clearly, Trump needs to set a different tone during this trip as he prepares to meet with exhausted firefighters and victims who have lost loved ones and their homes to the flames.

But he didn’t get off to a good start on Saturday morning by wading into House Democrat business concerning who will be the next Speaker of the House come January when Democrats officially take control of Congress.

Many Democrats appear set to challenge Pelosi in favor of someone new for the position. However, Pelosi is one of the most experienced lawmakers on Capitol Hill and still wields plenty of influence. Republicans are clearly terrified of her, but they also see her as the boogeywoman they need ahead of 2020. It’s no wonder then that Trump is trying to stoke infighting among Democrats by offering his support for her return to the speakership.

I can get Nancy Pelosi as many votes as she wants in order for her to be Speaker of the House. She deserves this victory, she has earned it – but there are those in her party who are trying to take it away. She will win! @TomReedCongress

Trump may also be hoping his support will sway Pelosi from opening investigations into his administration and subpoenaing his records. Either that or he wants to make sure she doesn’t become speaker by endorsing her.

Stoking division on a day like today when Trump is about to visit a state ravaged by fires is offensive, and Twitter users did not let him get away with it.

Let me remind u that you’re going to a state today that’s been ravaged by its worst fire in history. Where 71 ppl have died/burned alive. Where 1000 are still missing. Where communities have been incinerated. And ur trying to stir up BULLSHIT on Twitter. Shame on you… #Trump

Glad you got your priorities straight. https://t.co/cAsZfsD1yD

This isn’t Pelosi’s first rodeo and you are woefully underestimating her skills and leadership.

Your best option is to #ResignNow.

A freight train of trouble is hurtling your way.

Sociopaths tend to see others as patrons or pawns. Trump will be weak and ingratiating to people he sees as powerful or able to do things for him. Those are his patrons. In this tweet, Donald is treating Nancy Pelosi as a pawn, believing he can manipulate her for his own agenda.

Shouldn’t you be going to California to rake leaves? How anyone can take you seriously anymore is beyond me. 25th. Now!

You can get her votes??? 😂! You can’t get your own people votes. Be ready to be checked and balanced by the House in January. And Pelosi will be at the wheel.
Trump: “I can make the sun come up tomorrow morning. Thank me now, I’m THAT powerful!”
Put some clothes on Emporer.

Don’t you have more important things to do than meddle in the Speaker’s election #Cheetolinni ? you still have kids in cages, #JamalKhasoggi Murder needs answers (@jaredkushner ) #TrumpRussia Or #GunReform ? there’s the scary #Caravan …Lots of important issues to attend to.

We’re not your level of stupid. You think if you endorse her we’ll rail against her out of spite. Ain’t gonna happen, Pudge. But good to know you’re terrified of her enough to make an even bigger fool of yourself. As if that was possible. #PelosiForSpeaker

No thanks, we have this. We don’t need a traitor to dictate our leadership.
Tick tock.