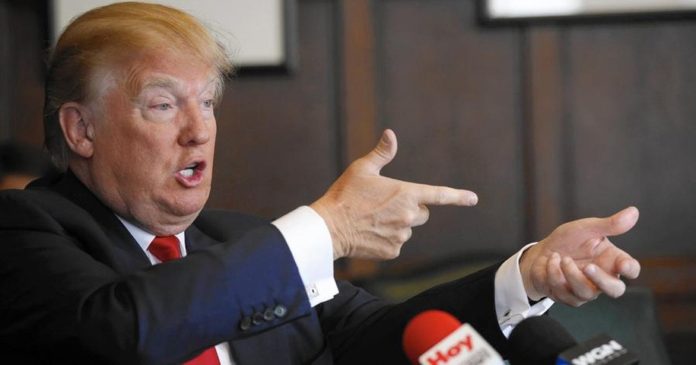 Though he has hinted that he might consider supporting legislation which would expand background checks for gun buyers, President Donald Trump seemed to suggest on Thursday that he thinks the solution to gun violence and mass shootings is building more mental institutions.

Before he left for a rally in New Hampshire, Trump told reporters:

“We’re looking at the whole gun situation. I do want people to remember the words ‘mental illness.’ These people are mentally ill. . . . I think we have to start building institutions again because, you know, if you look at the ’60s and ’70s, so many of these institutions were closed.

“We have to open up institutions ― we can’t let these people be on the streets.”

Reporter: What executive actions are you prepared to take on guns?

Trump: I do want people to remember the words ‘mental illness’. These people are mentally ill.. I think we have to start building institutions again.. We can’t let these people be on the streets pic.twitter.com/t4kBmw00JZ

But as HuffPost notes, an approach focusing on mental health would likely do very little to solve the problem of gun violence or mass shootings in the United States:

The suspected shooter in the El Paso massacre is believed to have posted a racist, anti-immigrant manifesto about his motivations, railing against a “Hispanic invasion” of Texas in an echo of the president’s racist rhetoric.

Research shows that most mass killers don’t have severe mental health problems. Experts have also long repeated that most people with mental health issues are not violent but are actually more likely to be victims of violence.

Data on the cause of gun violence also contradicts Trump’s mental health approach to the issue:

Fewer than 5% of the 120,000 gun-related killings in the U.S. from 2001 to 2010 were perpetrated by people diagnosed with mental illness, according to data from the Centers for Disease Control and Prevention.

Prudence Gourguechon, a former president of the American Psychoanalytic Association, notes that you cannot force anyone to seek treatment for their problems:

“You can’t force people into treatment; you can’t necessarily treat them successfully; and you certainly can’t lock them up forever.”

Attempting to blame mental health on the rise in gun violence is also a favorite talking point of the National Rifle Association (NRA), which spent $30 million to help elect Trump in 2016 and remains a steadfast supporter of the president.