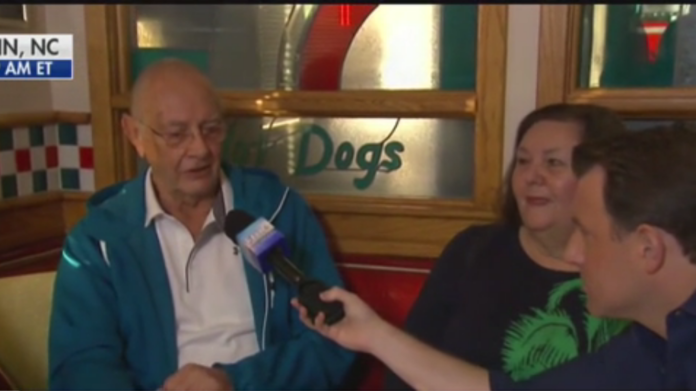 A man who supports President Donald Trump told Fox News Wednesday morning that he was upset with the way incoming House Speaker Nancy Pelosi spoke to the president during a White House meeting on Tuesday and suggested that criticism of the head of state is treason.

During a segment on the Fox morning show “Fox & Friends,” reporter Todd Piro was speaking with patrons at a diner in North Carolina about the possible government shutdown which may take place later this month. One woman, who said her name was Cathy, said she works as a government contractor and the shutdown would hurt her financially, but she quickly added that was fine with her:

“We need the wall. There are so many people trying to bust down our wall and come into our country illegally. It’s not that we don’t want them, we do want them but we want them to come legally so we can see that they are here for the right purposes and not a terrorist or something. We need that wall.”

“All they want to do is increase their own power and disparage the president.”

That led Piro to ask Bob:

“What do you say when people call this president, President Trump, unpresidential?”

“I think it’s next to treason. I think they need to support the president no matter who he is. You know, all this current group of Democrats are doing is providing aid and comfort to our enemies. And last I heard that was the definition of treason.”

Treason? Wonder what Bob thinks about conspiring with a foreign government to win an election the way Trump allegedly did? Hell, he’d probably be fine with it, as long as Trump assured him it wasn’t illegal or immoral.

As for criticism of the president being “next to treason,” apparently Bob isn’t familiar with the First Amendment. But that’s not surprising; most Trumpkins have little to no knowledge about anything that matters.