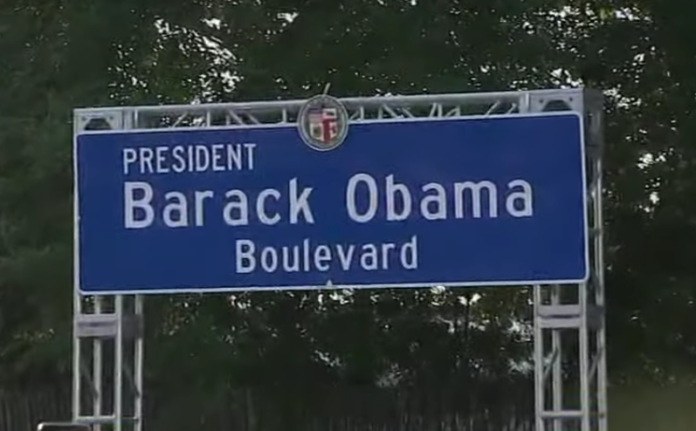 Los Angeles, California has a new street after the city officially unveiled President Barack Obama Boulevard over the weekend, and supporters of President Donald Trump are livid about it.

“As we drive through this city and we see past presidents on Adams, on Washington, on Jefferson and now we’ll have one that was in our lifetime, who was a president for everybody: Barack Hussein Obama,” Mayor Eric Garcetti proclaimed according to the Los Angeles Times.

“As we drive through this city and we see past presidents on Adams, on Washington, on Jefferson and now we’ll have one that was in our lifetime, who was a president for everybody: Barack Hussein Obama,” Mayor Eric Garcetti said. https://t.co/o59Gl7epsA

The three and a half mile stretch used to be named Rodeo Road and sits in the middle of an iconic black community where Obama held a rally in 2007.

Of course, racist Trump supporters whined about the honor afforded to America’s first black president, whom the current president can’t stop obsessing over.

Poor street named after obama, as a reminder that obama keep these people poor.

Pitiful. Next they will name a street after Charles Manson

He was for everybody but Americans!

You can cross LA off my “great places to go” list!

Yeah, lets celebrate a lying, loser, who pushed genocide of Christians further down the road, and set race relations back fifty years, and attempted to sew the seeds of communism into our country. https://t.co/1f1UdQmaWs #FoxNews

If Trump supporters are mad about this, just wait until they discover that Florida renamed the “Old Dixie” highway after him in 2017. They’ll really be furious with that change.