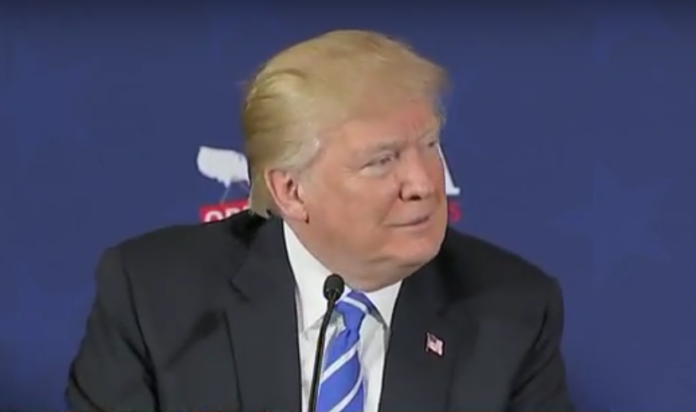 President Donald Trump can insist that he hasn’t dragged the United States into a trade war with China all he wants, but that’s exactly what he has done.

After Trump slapped a $50 billion tariff on Chinese products earlier this week, China responded in kind.

Apparently, Trump expected China to just lay down and not retaliate.

However, China did retaliate and now Trump is livid about it, which is why he threatened to hit China with a $100 billion tariff. Trump said in a statement on Thursday:

“Rather than remedy its misconduct, China has chosen to harm our farmers and manufacturers. In light of China’s unfair retaliation, I have instructed the [United States Trade Representative] to consider whether $100 billion of additional tariffs would be appropriate.”

Chinese tariff leveled against the United States primarily targeted agricultural products such as soybeans, which just happen to be grown in states that voted for Trump in 2016.

On Friday morning, Trump retweeted a post he wrote on Wednesday insisting that there is no trade war.

We are not in a trade war with China, that war was lost many years ago by the foolish, or incompetent, people who represented the U.S. Now we have a Trade Deficit of $500 Billion a year, with Intellectual Property Theft of another $300 Billion. We cannot let this continue!

China certainly believes this is a trade war, which is why the Chinese government responded by threatening equal retaliatory tariffs against the United States no matter what Trump hits them with, stating that they have no wish:

“…To fight a trade war, but we are not afraid of fighting it.”

“If the United States disregards the opposition of China and the international community, and insists on unilateralist and protectionist trade practices, the Chinese side will follow through to the end and will not hesitate to fight back at any cost. We will take new comprehensive measures to respond and resolutely defend the interests of the country and the people.”

Trump’s tariffs have already caused the stock market to tumble, including several hundred points after he issued his latest threat.

China is not going to just let Trump tariff them without consequences. So, it appears Trump is going to continue escalating the tariffs every time China responds with tariffs of their own. And China is prepared to fight this trade war.

China could not only hit American companies by halting Chinese tourism in the United States, it could take the backbreaking step of no longer buying U.S. debt.

China is the biggest foreign holder of US Treasury debt, owning about $1.17 trillion. A report by Bloomberg in January rattled markets by suggesting China was considering cutting back on the amount of US debt it buys, pointing to trade tensions as one of the reasons.

Investors worry that if China purchases fewer Treasuries, the US government would have to find alternative buyers. That could prompt a rise in the rate of interest it pays and increase the cost of serving America’s vast national debt.

Trump is putting our economy in the crosshairs by attacking China so much. He once claimed that trade wars are easy to win, but he’s about to find out that they are far more complicated and dangerous.

When it’s all said and done, not even a tariff loophole used during the Great Depression will help us stave off the economic downturn that is surely coming our way.

And Americans will only have Trump and his ego to blame.