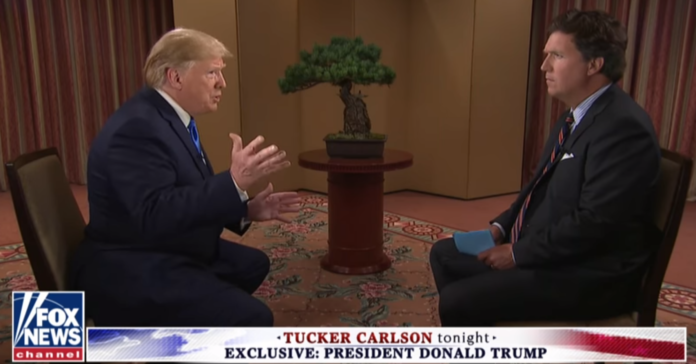 With all of the problems and challenges facing this country and the world, President Donald Trump remains obsessed with the number of followers he has on Twitter, and told Fox Host Tucker Carlson Monday evening that the social media platform is deliberately discriminating against him.

Carlson got Trump going on the Twitter conspiracy theory by suggesting that Google was also discriminating against the president:

“Google, by some measures, the most powerful company in the world — all information flows through it — they’re against you. They don’t want you reelected. Can you get reelected if Google is against you?”

“I won. They were totally against me. I won.”

“If you look at Twitter, I have millions and millions of people on Twitter and it’s — you know, it’s a very good arm for me. It’s great social media. But they don’t treat me right. And I know for a fact, I mean, a lot of people try and follow me and it’s very hard. I have so many people coming up that they say, ‘Sir, it’s so hard. They make it hard to follow.’ What they’re doing is wrong and possibly illegal. And a lot of things are being looked at right now.”

Here’s a suggestion for the president: If you think Twitter is unfair to you, delete your account and boycott them. Urge your followers and fans to do the same. Wouldn’t that be the best way to punish them?

Trump’s whining led Carlson to suggest that perhaps the Department of Justice needs to investigate Twitter. In response, the president remarked:

Here’s what really bothers the president about Twitter: He has 61.6 million followers, but former President Barack Obama has 107 million. If the numbers were reversed, he’d be signing Twitter’s praises from the rooftops.

As usual, Trump knows he can never measure up to Obama, and that infuriates him.