The United States Blues
Home News Trump tells Hannity the Mueller investigation was ‘an attempted overthrow’ of the... 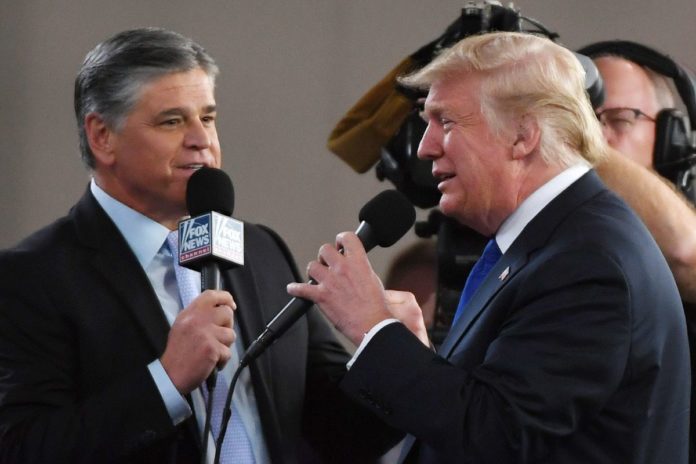 Thursday evening, President Donald Trump called into Sean Hannity’s show on Fox News and gave a rambling — at times nearly incoherent — interview in which he accused Special Counsel Robert Mueller of trying to orchestrate a “coup” with this investigation of Russian interference in the 2016 election:

“This was a coup. Bigger than Watergate, because it means so much. This wasn’t stealing information from an office in the Watergate apartments. This was an attempted coup. Like a third world country and inconceivable.”

And then there was the oft-repeated refrain from Trump that all the blame should be placed on 2016 Democratic nominee Hillary Clinton:

While it was at, it Trump also lavished praise on Hannity, telling him the news media:

“Owe me an apology. A big one. They owe you an apology, and all of the people that you mentioned previously, and so many other people…

“They were fake, they were corrupt. And if they could change I would be the first one to say I respect the fact that you have changed. If they don’t change, they have lost all credibility.”

TRUMP: “This was a coup. This wasn’t stealing information from an office in the Watergate apartments. This was an attempted coup. Like a third world country. Inconceivable.” pic.twitter.com/3g8LBIstLS

As is always the case with this president, a quick fact check easily proves that his statements in the Thursday evening interview/rant are pure fiction:

Imagine the lies we’re going to hear in the months ahead, with an election right around the corner.