The United States Blues
Home News Trump Thanks Saudi Arabia For Lower Oil Prices After Letting Them Off... 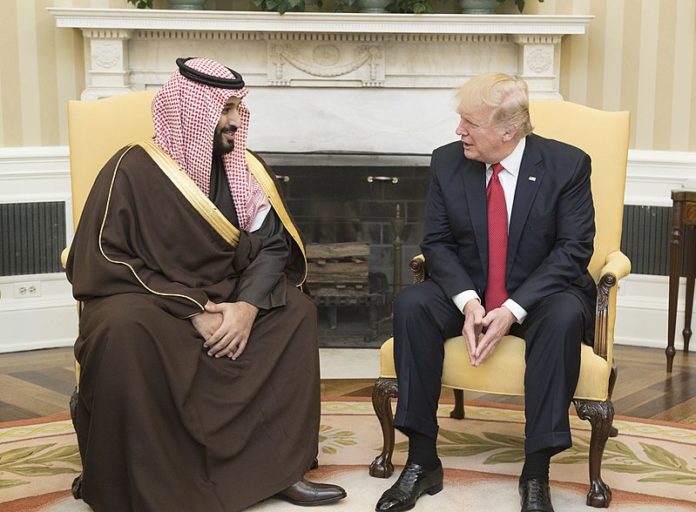 President Donald Trump gave Saudi Arabia a pass for murdering a United States journalist and resident on Tuesday, and followed up by disgustingly thanking them for lower oil prices.

In what certainly could look like a quid pro quo in exchange for Trump letting the authoritarian nation off the hook for the brutal torture and killing of Jamal Khashoggi, Trump gave credit to the Saudis for lower oil prices as if he expected something in return.

Oil prices getting lower. Great! Like a big Tax Cut for America and the World. Enjoy! $54, was just $82. Thank you to Saudi Arabia, but let’s go lower!

Of course, lower oil prices are actually having a negative impact on the economy as a whole now, according to Marketwatch.

People will pay a little less at the pump, but the drag on the economy will hit the manufacturing and energy production sectors of an economy that is already slowing down.

Economics aside, Trump is treating lower oil prices as an exchange. He protects Saudi Arabia and Crown Prince Mohammad bin Salman, and gets lower oil prices he wants in return. It’s nothing but a bribe because a United States resident was brutally murdered by a regime simply because they didn’t like Khashoggi’s reporting. It’s sickening that Trump would use the murder of a man as a bargaining chip so he can point at lower oil prices as a victory for his pathetic administration.

That means any American life is expendable to Trump as long as he gets something in return.

You are literally owned by every murderous Dictator on the globe at this point.

Are you seriously thanking Saudi Arabia right now? What the hell is wrong with you?

So is this why you refused to condemn them for the brutal murder of Khashoggi?

WTF is wrong with you? ‘Thanking’ #SaudiArabia after your intelligence agencies just confirmed that it / #MBS ordered #JamalKhashoggi to be murdered/dismembered? Because of MONEY? You’re a sociopath. An amoral monster. #Trump

Tweeting the price of an American journalist’s life for all the world to see.

Then he thanks the murderers.